The FCC's National Broadband Plan will be largely funded through the sale of radio spectrum the FCC doesn't own: a good trick if one can pull it off.

Beyond selling off other people's spectrum to pay for the National Broadband Plan the FCC is also planning to monitor existing operators to ensure they report connection speeds accurately, and create a publicly-accessible database of spectrum owners. Not to mention charging government users and building a national monitoring network mounted on top of cars.

We've already looked at how the FCC is planning to revolutionise American access to the internet over wired connections, but even more important is how the FCC plans to fund those changes, and where it's going to find enough spectrum to provide wireless access for all.

Information on "real" speeds and coverage will be collected by a smartphone application, handed out free to interested parties, with the information made public by the FCC. Interested members of the public will also be able to see who owns what radio spectrum thanks to a new "spectrum dashboard" that the FCC would like to set up. 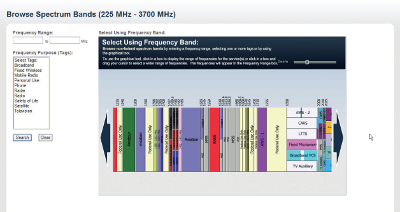 The idea is to allow searching under company names and so forth, so anyone can use it. There's a full sized version too.

A lot of that spectrum is owned, and used, by the federal government, and much of that will be lying fallow as there's no incentive to give it up. In the UK Ofcom is in the process of making such owners pay an estimated commercial value, an approach the FCC would like to copy both to raise revenue for the more expensive parts of the plan, and encourage government users to give up spectrum.

The FCC is also interested in Ofcom's trial of spectrum-usage monitoring, which produced such interesting results - though not interesting enough for Ofcom to carry it through. The FCC reckons it's worth the $10-$15m it would cost to do the same thing in the USA, to identify who's using what and why - mainly so the FCC can find some more spectrum to sell off.

But the National Broadband Plan calls for finding 300MHz within the next five years, and another 200MHz before 2020. Pressuring federal bodies, and scanning for unused spectrum, might help in the long term but there's still 300MHz to find right now.

The biggest chunk of that is expected to come from the TV broadcasters, who will apparently hand to over 120MHz of prime spectrum released by more-efficient slotting and sharing channels. Rearranging channels means retuning everyone's set-top boxes, and slotting more channels into the same space could reduce quality, but the FCC stresses it will be voluntary and TV broadcasters will get a cut of the auction proceeds in exchange.

There are more radical alternatives which warrant attention, according to the plan, such as the CTIA's plan for TV transmitters mounted on cellular base stations. There's even the wildly-more-radical give-up-broadcast-tv-entirely option, which the plan suggests could be applied in urban areas where congestion is highest and cable operators could be required to carry the existing broadcast TV, with suitable financial inducement.

But those ideas are aspiration thoughts for the next 200MHz of spectrum, the FCC reckons better slotting will release 120MHz of spectrum which is all it needs to meet the 300MHz goal.

The next 90MHz comes from satellite ground components - those in-fill transmitters that are supposed to operate at the same frequency as the satellites but provide coverage under cover/in buildings and so forth. Until now the owners haven't been allowed to deploy until they had an operational satellite system, but under the plan those rules get relaxed and build-out can start immediately, though the FCC still wants them to get the birds in the air at some point for emergency and blanket coverage.

Then there's the "D Block" spectrum that the FCC keeps trying to auction off, but has now admitted that no one wants if it comes with a commitment to building a first-responders network. So D Block gets sold off, and first responders get LTE kit - the plan specifies LTE as the preferred technology which is a blow, abet an expected one, for the WiMAX camp. That kit will get priority access to new, and existing, networks, but no dedicated national network.

The rest of the 300MHz comes from federally-owned spectrum, and some that was already scheduled to be auctioned off. The FCC has given itself until October to find the remaining 200MHz of spectrum needed to meet the 500MHz-by-2020 target - but perhaps some federal bodies will be willing to hand over their wavelengths once they're paying for them. ®