Review It's taken a while, but LG has finally got around to releasing an Android handset. We're pleased to see they haven't just gone for a me-too 'droid either – the GW620 is firmly aimed at the lower mid-range rather than the smartphone high end. It puts the focus firmly on social networking, with integrated SNS, a slide-out Qwerty keyboard, plus Wi-Fi, HSDPA 3G, 5Mp camera and GPS. 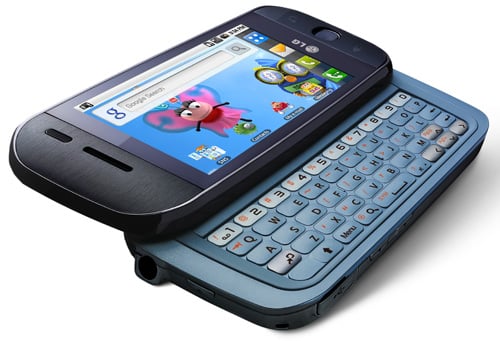 The InTouch Max GW620 is a pocket-friendly 109 x 55 x 16mm with a 3.2in touchscreen – so it's on the small side when compared the likes of the iPhone or media-tastic Android handsets like the Google Nexus One. It's nice and curvy too, with sloping edges top and bottom and rounded corners, all of which helps it to sit very neatly in hand or pocket despite the inevitable depth lent it by the slide-out Qwerty keyboard.

It's black gloss on the front, with an anti-slip rubberised coating on the back – ah, those little things mean a lot – together with a protruding camera lens and LED flash. The touchscreen is set within a surround, which includes the LG logo, but no buttons, touch sensitive or otherwise, which seems like a waste of real estate.

Beneath it are touch-sensitive home and back keys, plus a hard menu button. On the sides are dedicated camera and music buttons, a volume rocker, micro SD card – it comes with a 1GB version already loaded – and USB power/sync slots covered by a flimsy plastic grommet, with a power button and 3.5mm audio jack on top.

So far, so good, but the resistive LCD screen, while bright and fairly sharp, left a lot to be desired in terms of responsiveness. We often had to tap an icon several times to get it to work, and we sometimes found ourselves opening apps that we're sure we didn't touch. And while we're having a pop, the processor could be unbearably slow on the uptake and there were some unacceptably long lags on occasion when moving between applications.

A little chunky, but that's Qwerty sliderphones for you

The GW620 is running the Android 1.5 OS, rather the more recent 2.0 we've seen on the Motorola Milestone and others. It does all the usual Android stuff, of course, allowing you to spread a range of icons across three home screens, plus the option to add more from the Android Market. Yet here you'll see the basic 1.5 version, rather than the fancy recent upgrade. There's also the pull-down notifications page from the top of the screen and the pull-up apps menu from the bottom.