Mix10 The key difference between Windows Phone 7 and Windows Mobile is not Silverlight, the Windows Marketplace lock-in, or the disallowing of native-code applications.

Rather, Windows Phone 7 is Microsoft's best effort at creating a user-centric device, something that is actually a pleasure to use. Its existence has everything to do with Apple and the way it has stolen Microsoft's market - in music downloads, in high-end laptops, soon in tablet computers, and of course in smartphones themselves.

And why has Apple succeeded? As Microsoft Research principal researcher Bill Buxton told The Reg three years ago, two words: industrial design. His mission in joining the company was to reform it into one that understood the importance of user experience. 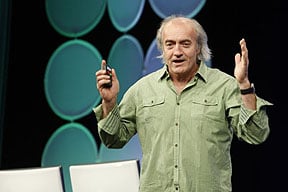 Buxton: Microsoft changed the water it drinks on mobile

It does not come easy. Intellectually, Microsoft gets this message, but its culture and legacy is against it. The company's annual Mix conference, held last week in Las Vegas, Nevada, is meant to be design-focused, but there was just as much developer content, such as detailed sessions on the OData protocol. Some attendees complained that it was too much like the Professional Developers Conference held four months earlier. Adobe has a design community, Microsoft has a developer community - and a transition is hard to pull off.

Further, Microsoft has a problem with its core software products such as Office. There is no more hope of Outlook becoming user-centric than there was for the old Windows Mobile. It does not need a dollop of Office Ribbon, it needs complete reconstruction.

Microsoft's dependency on OEM partners, the engine of its growth, also works against its design efforts. I was reminded of this recently when starting a Windows 7 Toshiba Netbook for the first time, fresh out of its box. Windows 7 is meant to be quieter, but the screen soon filled with ugly dialogs competing for attention, mostly from third-parties. It's this kind of thing that drives users to the Mac.

'Partnering innovation' is generally a disaster for Microsoft.

Ballmer makes a nod towards it as a matter of good public relations, but by locking down both hardware and software, the company is trying to minimize the extent to which OEMs can spoil the design effort.

During Mix10 last week I asked Buxton what influence he had on the design of Windows Phone 7. He said it was mostly the work of others, but it does show the ascendancy of design at Microsoft. "We kinda changed the water that we drink, in the sense that all through the design community within the company we talk, and we have a common goal in terms of trying to bring a certain change of sensibility," he said. 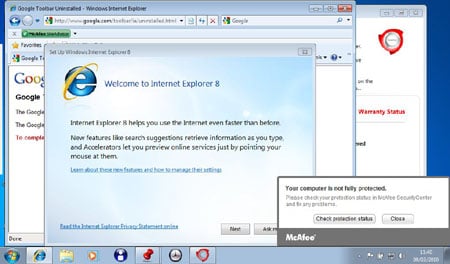 Dialog hell with Windows 7 Netbook - the future of Windows Phone 7?

"For me it's not even about the phone, but what's interesting is that it's the first product in the company with critical mass that's embraced this ... it will have an impact on other parts of the company."

Whether or not he was directly involved, Windows Phone 7 does seem to embody many of Buxton's principles, such as the attention given to transitions between states, with attractive flowing animations. "If you don't have as much detail in the transition as you do in the state, you're going to get it wrong," Buxton said at Mix09.

The priority of design is one reason for the limited features in this release, and for that Microsoft is taking heat from developers. No native code, no multi-tasking, no socket support, no local SQL, no communication between applications - the list goes on. Such features may be opened up gradually in future versions, but only if resource usage and user control are protected.

If users love the phone, these limitations will be forgiven. Microsoft is coming from behind though, and rivals including Apple and makers of Android phones will not be standing still while the company tries to catch up. ®