'Dracula's in charge of the blood bank'

Exclusive The peer leading the second Climategate enquiry at the University of East Anglia serves as a director of one of the most powerful environmental networks in the world, according to Companies House documents - and has failed to declare it.

Lord Oxburgh, a geologist by training and the former scientific advisor to the Ministry of Defence, was appointed to lead the enquiry into the scientific aspects of the Climategate scandal on Monday. But Oxburgh is also a director of GLOBE, the Global Legislators Organisation for a Balanced Environment.

GLOBE may be too obscure to merit its own Wikipedia entry, but that belies its wealth and influence. It funds meetings for parliamentarians worldwide with an interest in climate change, and prior to the Copenhagen Summit GLOBE issued guidelines (pdf) for legislators. Little expense is spared: in one year alone, one peer - Lord Michael Jay of Ewelme - enjoyed seven club class flights and hotel accommodation, at GLOBE's expense. There's no greater love a Parliamentarian can give to the global warming cause. And in return, Globe lists Oxburgh as one of 23 key legislators. 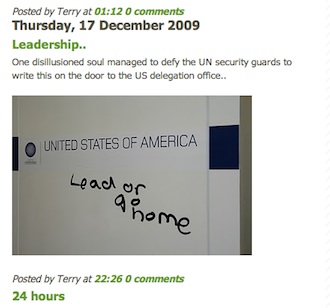 At its blog, GLOBE wears its heart on its sleeve

In the House of Lords Register of Lords' Interests, Oxburgh lists under remunerated directorships his chairmanship of Falck Renewables, and chairmanship of Blue NG, a renewable power company. (Oxburgh holds no shares in Falck Renewables, and serves as a non-exec chairman.) He also declares that he is an advisor to Climate Change Capital, to the Low Carbon Initiative, Evo-Electric, Fujitsu, and an environmental advisor to Deutsche Bank. For a year he was non-exec chairman of Shell.

GLOBE is conspicuous by its absence, however. Oxburgh joined GLOBE in 2008. The University of East Anglia appointed Oxburgh after consulting the Royal Society.

"We are grateful to the Royal Society for helping us to identify such a strong panel and to the members for dedicating their time to this important matter," said the University in a press statement. It may not be the smartest advice the UEA has ever received - the Royal Society's partisanship is well known.

One insider, who declined to be named, described Oxburgh's appointment as "like putting Dracula in charge of the Blood Bank".

GLOBE has not returned our request for comment. Nor has the University. The network hasn't had much luck with its UK appointments, as key figures have become caught up in the MP expenses scandal.

In 2007 Oxburgh won a Lifetime Achievement Award from Platts. The judges said they were also impressed by “his very high ethical standards". ®