Iconoclastic Pentagon paradigm-mangler boffins at DARPA have done it again, unveiling plans for cunning floating modules which could be tipped off cargo ships out at sea and then drive about and snap themselves together to form floating offshore bases.

The new DARPA plan is called Tactically Expandable Maritime Platform (TEMP). According to the Pentagon warboffins:

We all love the intermodal transport system of ships, railways, lorries and so on which whisks ISO containers about the world with such impressive speed and economy. 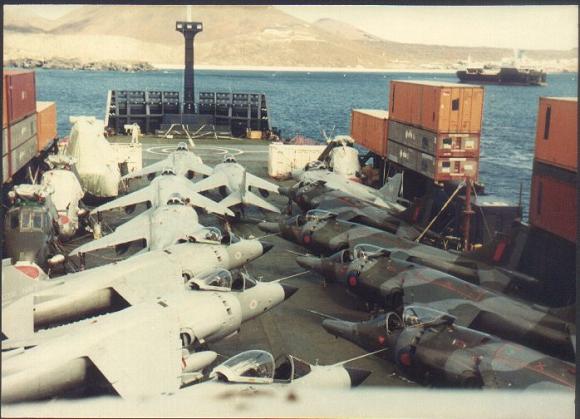 Container vessel at war in 1982. Choppers and jumpjets* could take off and land at the pad forward.

Certainly it can look particularly impressive compared to conventional naval methods of dominating a stretch of ocean, which generally call for large numbers of scarce, expensive, highly specialised warships which may not really be much use for the likeliest missions.

Everyday tasks for navies today include such things as humanitarian assistance and disaster relief ("HA/DR", as it is apparently known in the US Navy) or "maritime domain awareness and interdiction operations" - that is, detecting and stopping such activities as piracy and smuggling of weapons, drugs, sanctions-busting cargoes etc.