Seagoing British boffins are about to plunge deeply into hot Caribbean bottom vents using a long, cigar-shaped, battery powered device. They expect the probings to offer valuable insights into the behaviour of alien life. 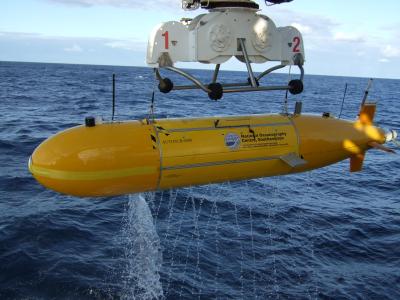 The aliens soon gave up their secrets after a good probing.

The bottom vents in question are the so-called "black smokers" of the three-mile-deep Cayman Trough, volcanic hot springs lying deep deep down in the eternal night of the oceanic abyss. They emit water "hot enough to melt lead".

The superheated vents are home to unique lifeforms, most of which feed on strange microbes nourished by the exotic minerals in the vent water. Unlike almost all life on Earth, the "black smoker" colonies don't ultimately draw their energy from the sun, but rather from the planet itself.

In theory at least, life of this sort might also be able to live in certain locations on other planets and moons in our solar system, where volcanic heat and liquid water could also be found - even though the rest of the body concerned receives far too little sunlight to sustain normal life.

"Studying the species that thrive in such unlikely havens gives us insights into patterns of marine life around the world, and even the possibility of life on other planets," says Jon Copley of Blighty's National Oceanography Centre (NOC) at Southampton.

The Cayman Trough is thought likely to be home to the deepest hot vents yet studied. The deeper the vents, the closer they are to the planet's hot core, and thus in general the hotter they are - which should mean even stranger life in residence.

"We expect these vents to be the hottest yet," says Copley's colleague Doug Connelly. The NOC boffins are hoping to beat the world record for undersea spring hotness, which currently stands at 403°C at a 2.67-mile-deep vent in the mid-Atlantic.

The scientists are tooled up with selected underwater robots, including the NOC-developed, battery-powered yellow submarine known as Autosub6000. The sub's name indicates its designed maximum depth of 6,000m or 3.73 miles; it should be able to probe vents significantly deeper and hotter than the Atlantic record-holder.

The Autosub' predecessors, used for shallower - though still pretty challenging - missions beneath the Antarctic ice shelves, ran on thousands of ordinary D-cell batteries; but the 6000 has now moved on to Li-ion technology. It is a true probe droid, completely autonomous during a mission.

Copley, Connelly and their fellow boffins set sail today from Trinidad aboard the Royal Research Ship James Cook to probe the Cayman abyss; the expedition will finish on 24 April, when the James Cook will put in to Jamaica. Updates will be posted from time to time during the expedition at the NOC website.

In summary then, what we've got here is boffins setting sail to seek out unknown "alien" beings which have lived for aeons in their eternally dark, hot abyssal realms undisturbed by normal sunlit life on Earth - and which may be related or similar to as-yet undiscovered alien races resident on other planets.

Who says science is boring? ®

If you absolutely must keep using those proprietary formats, walk this way
Applications19 Aug 2022 | 16