Power monitoring across the desktop estate

What can be done and is anyone doing anything?

Workshop Despite the pressure on organisations to operate to more “green” agendas, the reality is that for many the reasons they actually fund anything are related to a desire to save electricity or to meet external requirements, usually legislative. So far the majority of “green” projects have usually been focussed on reducing electricity consumption and thereby saving operational costs.

To date, the majority of such power reduction projects have focused on data centres and computer rooms. Considerably less attention is paid to the electricity needed to operate often extensive desktop estates. Is there any evidence that this could be about to change?

Research we carried out last year with readers of The Register highlighted that even in large organisations the cost of power / electricity to operate data centres has yet to become a major focus of attention. Less than 10 per cent of you that took part in the research told us that the cost of power was a major challenge. Only a few more acknowledged that availability of power for data centres was a real issue.

So is desktop power consumption creating any pressure for change? Some insights we captured from the audience last October shows that the answer is apparently no, at least so far. As you can see in the graphic, power management and savings on electricity costs are nothing like the most significant criteria when evaluating changes to the desktop systems deployed in mainstream business. 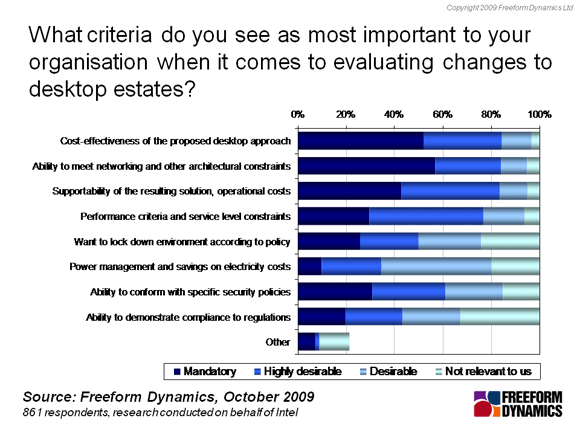 It will be interesting to see if this sentiment changes over the course of the next year as projects focussing on desktop refresh come into play. It is likely that previously overlooked components (such as power) in the overall cost of managing desktops may become a factor, especially when considering the various options for introducing virtualisation into the environment.

In fact, it is worthwhile considering the comments of an IT professional with whom I recently recorded a video Webinar. The Lancashire Constabulary has already virtualised more than 1,000 desktops with another 4,000 scheduled to follow over the course of this year.

We discussed the effects of desktop virtualisation on electricity consumption, and there was an interesting twist. The spokesperson said that rather than being credited with saving power, the data centre was actually being called out for the increase in consumption as centralised virtual desktops were rolled out. Although the electricity used by the offices will fall (eg as older desktops are progressively replaced with thin clients), the data centre power bill goes up, and there was no mechanism in the project to link the two.

But even if there is a desire to gain better control over power consumed by desktops, is it actually possible to monitor and manage power consumption across tens, hundreds or thousands of PCs? Companies such as 1E and Sentilla offer software tools to help make more sense of energy consumption information. The systems management, hardware and chip vendors are all progressively adding to their power monitoring and management capabilities.

But what’s happening in your organisation? Is monitoring the electricity consumed by your desktop estate of any interest at all? Please let us know, especially if you are already tacking the challenge head on, or even from the side. ®

Latest platform software has not been licensed by two-thirds of legacy users, despite strong growth
Databases6 Dec 2022 | 3