An Apple patent application published Thursday describes a variety of techniques for capturing light from external sources to either replace or supplement traditional backlighting of electronic-device displays.

The goals of the application, entitled "External Light Illumination of Display Screens", are threefold: to make displays more visible in bright sunlight, to cut down on the power needed to backlight displays, and by doing so to allow devices to be built with smaller batteries, thus reducing weight and bulk.

Although the application - like most of its ilk - is maddeningly opaque and convoluted, the methods it describes break down into two general techniques: first, piping light from external or internal sources to the back or edges of a display using what the filing refers to as a "manifold" or "light harness"; and second, using a reflector to capture ambient light or supplement internal lighting sources.

Those external light sources can include - but, this being a patent application, aren't limited to - "an accessory light bulb, the centralized illumination system in a vehicle cabin, or the sun".

In the manifold method, ambient light is fed into either the backside or the edges of the display through light-guide pipes constructed of "any suitable material, such as glass," that can have a reflective coating to minimize light loss. 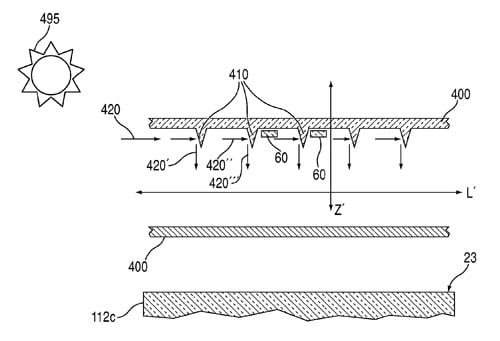 Inside a manifold, 'reflecting cones' (410) supported by LEDs (60) distribute light

The light-capturing ends of the manifolds can be arrayed around any or all sides of the display. They can either be the only method used to backlight the display, or they can be used in conjunction with traditional backlighting. In the latter example, the device may either sense when the ambient light is sufficient to illuminate the display and turn off the backlighting, or when ambient light is insufficient and fire it up.

A manifold can have internal "reflecting cones" to break up the light beam in order to distribute the light evenly. In addition, LEDs can be placed between those cones to supplement the light captured externally and traveling through the manifold.

In addition, the manifold can have a reflector or "funnel" that can be aimed at an external light source to direct light into the manifold. It can either be aimed manually or set to "automatically redirect itself toward a light source" by using, for example, solar cells to determine where light is brightest, then a motorized device to orient the light-capturing element.

The external light collector "may resemble an umbrella, and may include thin reflective material on a lightweight frame that the user may collapse when not in use". A fiber-optic cable can also be used to channel the light captured by the collector into the light-distributing manifold, thus allowing the collector to be set at some distance from the display.

The second ambient light–capturing method involves either a reflector placed behind the display or - in its simplest form - merely a translucent backing for the display that simply lets in any ambient light to do the backlighting. 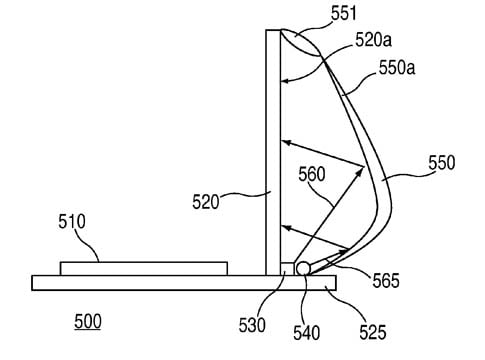 When closed, a reflector can direct light from a manifold (540) or an internal light source (530) 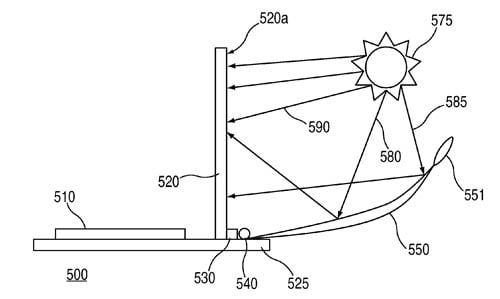 When the reflector is open, the sunlight can either bounce off it or directly backlight the display

In a combo method, the reflector could be pivoted closed to direct light from a manifold or internal light source to the back of the display. The reflector could alternatively be pivoted open - perhaps by "using a wrist flick motion similar to that used to open a cellular telephone" - to reflect ambient light. It could also be removed entirely to simply let powerful ambient light such as the sun - diffused by a transluscent panel - to backlight the display when the device is properly oriented to do so. ®

Although the illustrations accompanying the patent application all picture a laptop, proper patentese requires that the definition of an "electronic device" to be as broad as possible - in this case the list is pretty long:

What, no left-handed smoke shifters?