Intel's switch to the Nehalem architecture was finally completed Tuesday with the launch of the Nehalem-EX Xeon 6500 and 7500 processors, the last of the Core, Xeon, and Itanium chips to get the Quick Path Interconnect and a slew of features that make Intel chips compete head-to-head with alternatives from Advanced Micro Devices. The price war at the midrange and high-end of the x64 market can now get underway, while the all-out, total price war awaits the debut of AMD's Opteron 6100 processors in the second quarter.

Since the summer of 2008. Intel has been previewing its top-end, eight-core Nehalem-EX beast, which we now know as the Xeon X7560. As it has done with prior generations of Xeons, the Nehalem-EX line is not comprised of one or two chips, but a mix of chips with different features (clock speed, cache memory, HyperThreading, and Turbo Boost) dialed up and down to give customers chips tuned for specific workloads.

While last year's Nehalem-EP Xeon 5500 and this year's Westmere-EP Xeon 5600 processors are aimed at workstations or servers with two sockets, with the Nehalem-EX lineup, Intel has broadened the definition of its Expandable Server (this is apparently what EX is short for, with EP is supposed to be an abbreviation for Efficient Performance) to include two-socket machines as well as the four-socket and larger machines that prior generations of Xeon MP processors were designed for.

Intel, no doubt, would have preferred to keep the Xeon DP and Xeon MP product lines more distinct, and charged a hefty premium for machines that needed expanded processor sockets or memory capability. But server makers and their customers were having none of that. With the rapid adoption of server virtualization and the need for larger memory footprints even for two-socket boxes, the Nehalem-EX processors have been tweaked so they can be used to support very fat memory configurations on even two-socket workhorse servers. This will eat into the volume Xeon 5500 and 5600 market, to be sure, but it is better to sell a Xeon 6500 or 7500 server in a two-socket box than have a customer dump Intel for AMD.

The Xeon 6500 and 7500 processors will also blur some lines between Xeon processors and the former "flagship" Itanium processors, which were supposed to take over the desktop and server arena starting a decade ago, but have been relegated mostly to high-end servers from HP running HP-UX, NonStop, and OpenVMS at this point in their history. The Itaniums were distinct in many ways from the Xeons, but the main distinction they held was better reliability, availability, and serviceability (RAS) features than Xeons had, and on par with mainframe, RISC, and other proprietary architectures from days done by. 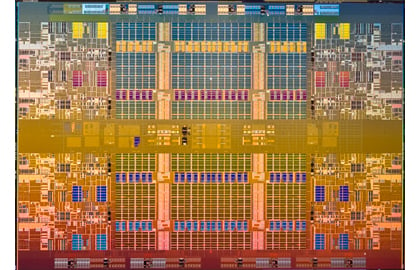 But at the launch event today in San Francisco, Kirk Skaugen, vice president of the Intel Architecture Group and general manager of its Data Center Group, made no bones about the fact that the Nehalem-EX processors and their related Boxboro chipset that is shared with the Itanium 9300 processors launched in early February have common RAS features.

The new chip, explained Skaugen, has 20 new RAS features, including extended page tables and virtual I/O capabilities as well as a function that is in mainframes, RISC iron, and Itaniums called machine check architecture recovery, which allows a server to have a double-bit error in main memory and cope with it without halting the system. With Windows, Solaris, and Linux supporting these RAS features, as well as VMware's ESX Server hypervisor, this makes servers based on the Xeon 7500s just as suitable a replacement for proprietary midrange and mainframe platforms and RISC/Unix servers as the formerly beloved Itaniums.