Using the latest technology, a single team will produce stories for both groups flagship titles, the Daily Mail and the Guardian, in a process that will be largely automated.

Marketing teams at both newspapers discovered a new super-segment of the declining newspaper market they have informally dubbed 'the new authoritarian'. According to one circulation manager, this is a reader who "wants to find out what everybody is doing, and stop them doing it", paraphrasing AP Herbert.

In practice it means a story only need be written once. Software then tailors the copy and routes it to the correct title, so for example 'BROKEN BRITAIN' and 'BROKEN PLANET' stories essentially share the same misanthropic outlook - and 94 per cent common verbiage.

In another innovation, the groups have bought out the image and branding rights to leading columnists, who will be released from their contracts. Columns bylined to Polly Toynbee, Richard Littlejohn, Jan Moir and George Monbiot will continue, although mostly written using the new automated software. Reader comments will also be automated, with readers able to choose a "party to blame" from a palette of options tailored to suit their prejudices, with options including asylum seekers, capitalist pigs, teachers, record companies, and human population growth. Only the latter option is common to both readers.

Early trials were prone to error, as these front pages show. Regular Guardian readers will have been surprised with this: 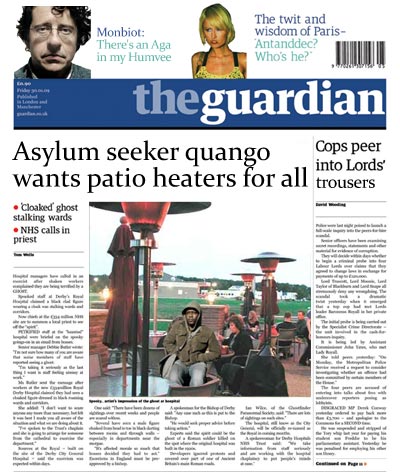 And Mail readers who saw this will have been left with the uneasy sensation that something was not quite right: 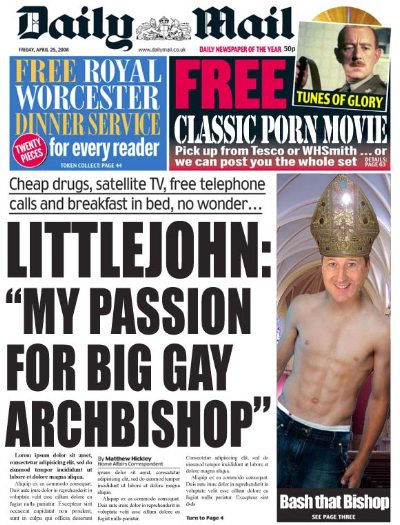 The new venture will be called Associated Puritanical plc, and will allow Northcliffe House in Kensington, and the Guardian's largely-empty new facilities at King's Cross to be sold. The unified editorial team will relocate to a bunker near Goodge Street, to await the end of the world. ®