Photos To bag yourself an iPad on its day of release, you either have to have planned ahead or know the best place to shop. I didn't and don't.

Unless you've been trekking through the high-desert Pamir Mountains in southeast Tajikistan, you knew that Saturday was the day that Apple's long awaited "magical and revolutionary" iPad went on sale in the US.

I hadn't planned on buying one - 1.0 anything gives me the heebie-jeebies - but at the last minute I thought, "What the hell ... might be interesting" - so I headed out at 8:00 a.m. on a crisp spring morning, giving myself plenty of time to get to downtown San Francisco for the flagship Stockton Street Apple Store's opening at 9:00 a.m.

When I arrived, I knew I had made a mistake. 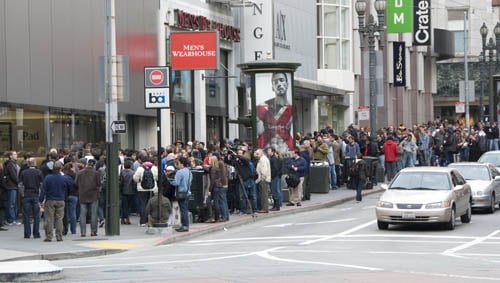 The two parallel lines outside the Stockton Street store right before the 9:00 a.m. opening

The crowd was huge. Two lines extended from the store's as-yet-unopened doorway. The longer of the two was filled with people who already had reserved an iPad, and were just there to pick it up - it reached all the way up the block, turned the corner, and extended well down that block. The line for folks who had no reservations was shorter - only about a block long.

If you had a reservation, your line at the Stockton Street store wrapped around the block

I thought that odd, but then remembered that Apple had said that if you didn't have a reservation, you might be able to get an iPad if there were any left over from the reserved pile, but only after the reservation period ended at 3:00 p.m. 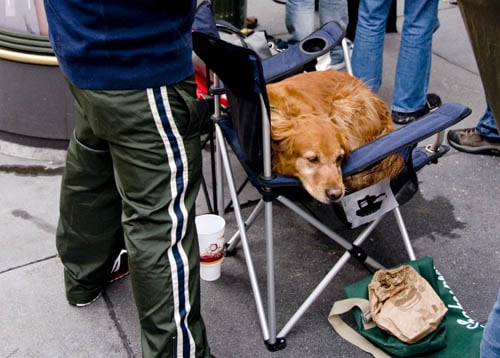 Many people brought chairs. Some sat in them, others let their friends rest their feet

In other words, hundreds of people without reservations were lining up at 9:00 a.m. on the offhand chance that they might be able to snag a leftover iPad six hours later. 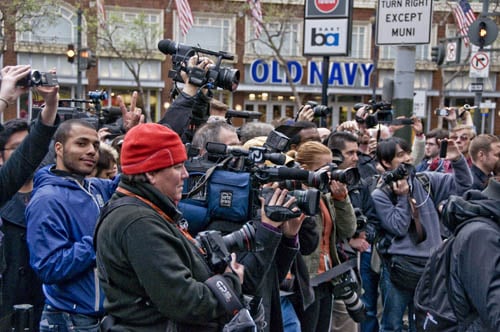 The media were in full force on Stockton Street - one flashing an old-school S.F. two-fingered hello

This did not sound like a fruitful way for me to spend what was beginning to look like a lovely day, so I popped back in my Mini and drove to the second San Francisco store, over on Chestnut Street in the increasingly trendy Marina District. 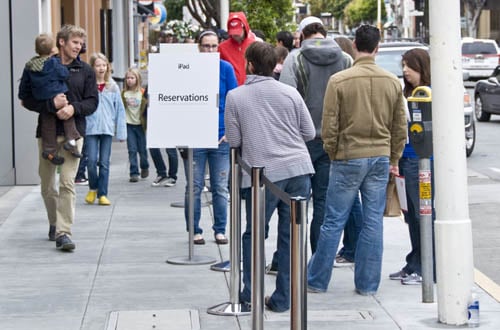 At the Chestnut Street store, only five people were waiting in the reservations line

As I walked up to the Chestnut Street store, my hopes rose. No fanbois frenzy, no media mosh pit - and only five people in the "reservations-only" line. Even the line of folks as unprepared as I included only a few dozen hardy - if somewhat frosty - souls. Surely I'd be able to snare the elusive iPad in this tiny crowd. 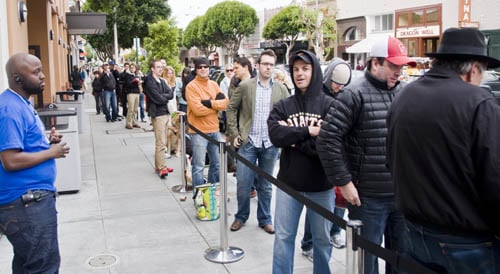 No such luck. After I took my place at the rear of the unprepared-fanboi line, a nice Appleonian came out of the store and explained to us that the reserved line had priority, and that the non-reserved line - that was us - wouldn't be allowed to buy the magical and revolutionary device until 3:00 p.m.

He did say, however, that a shipment of more iPads might be coming to loosen up the scarcity, and if that happened, we might be able to buy an iPad before 3:00 p.m. The problem was that he didn't know if the shipment was actually coming, or - if it was - when it might show up.