Cisco's new machines appear to be the ones that El Reg has been saying the company needs to get into the field to compete with the tier-one server makers. And indeed, to become one.

As El Reg previously reported, Cisco already upgraded its existing two-socket B-Series blade servers for the California Unified Computing System and their C-Series rack-based brethren back in mid-March, when Intel rolled out the six-core Westmere-EP Xeon 5600 processors. While two-socket boxes are fine for plenty of workloads, Cisco needs some bigger iron if it wants to be a player. Customers want headroom - even if they don't use it - and many also have bigger jobs that require more processing capacity than the two-socket boxes Cisco has been selling since last year.

Cisco doesn't need to monkey around with putting Xeon 7500s into two-socket machines because it already has its own memory-expansion ASIC, which offers 2.7 times the memory capacity of the fattest Xeon 5500 and 5600 servers with 18 memory slots, in selected models of the B-Series and C-Series boxes. This ASIC doesn't come cheap, but it allows customers to build systems using cheaper 2GB and 4GB memory sticks instead of having to use 4GB, 8GB, and now 16GB sticks to bulk up.

With the two Xeon 7500 machines announced Tuesday, the situation is more straightforward. These machines appear to be kosher Nehalem-EX boxes based on the Intel 7500 chipset, with the Cisco memory ASIC not being used to extend capacity. That doesn't mean such machines packing the Cisco ASIC won't be available in the future, of course.

The UCS B440-M1 blade server fits in the same UCS 5100 series chassis as the other horizontal blades in the California system. Up to four of the full-width blades can fit in the 6U blade enclosure, for a total of 128 cores in a single chassis. The B440-M1 has 32 memory DDR3 slots and Cisco is not yet supporting 16GB memory sticks, so maximum memory tops out at 256GB. 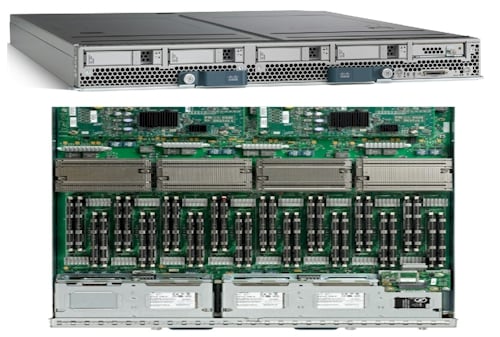 The B440-M1 blade can be configured with Xeon 7500s with four, six, or eight cores, but only supports 4GB and 8GB DIMMs. It has room for two mezzanine adapters (each with dual-port 10 Gigabit Ethernet links) for 40Gb/sec of fabric bandwidth back to the UCS switch. The blade has room for four 2.5-inch SAS or SATA disks and an integrated LSI Logic 2108 controller with RAID data protection and 1GB of write cache. The UCS 5108 chassis has from one to four 2,500 watt power supplies, which are rated at 92 per cent efficiency.

The rack model of Cisco's new Nehalem-EX machines is the C460-M1, and it comes in a 4U chassis that has room for 64 memory slots for a total of 512GB using 8GB memory sticks. As with the other Xeon 7500 machine, Cisco is only supporting 4GB and 8GB sticks right now. (In the spec sheet, Cisco says it is using Samsung's DDR3 memory.) The chassis has room for a dozen 2.5-inch SAS or SATA drives (in 10K or 15K RPM speeds), hot-swappable and mounted from the front. The server has eight PCI-Express peripheral slots on the mobo (four x8, three x4, and one x1 at the PCI 2.0 level) plus two PCI-Express 1.0 slots (x4) for legacy cards, with an eleventh slot dedicated to a LSI MegaRAID disk controller. The server has one Gigabit Ethernet and two 10 Gigabit Ethernet ports on the board.

Cisco says that the new Nehalem-EX machines will ship in the summer of this year. Pricing was not available at press time, and will no doubt not be divulged until the boxes are actually shipping.

This only leaves a couple of more questions. Will Cisco use the Boxboro chipset from Intel to make an eight-socket server based on the Xeon 7500s? The company could no doubt pack two of these into a UCS 5100 chassis, with a reasonable amount of memory, or could use its memory extender ASIC to put eight sockets and a truly large amount of memory - say 512GB or 1TB - up against those 64 cores. A 6U or 7U C-Series rack machine with eight processors and some memory extension might be able to have 2TB or 4TB, yielding a truly enterprise-class server in terms of cores and memory - one able to compete with all but the very largest systems out there. ®