Research in Motion's Blackberries have extended their lead over Apple's iPhone as the top smartphone platform in the US.

Microsoft's mobile presence is not doing so hot, either, with a dip of over 20 per cent to 15.1 per cent. 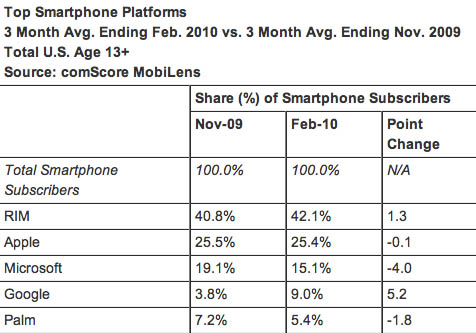 Apple's slippage is miniscule - Palm's is not (source: comScore)

These figures come from the most recent mobile-phone survey conducted by comScore, which compared - among other things - US smartphone subscribership during that period with the three previous months.

Although the Android platform's percentage increase is impressive, phones based on it have a long way to go before they catch up with RIM, which holds a 42.1 per cent market share, and Apple, which dropped one-tenth of a percentage point to 25.4.

Fans of the iPhone have little to worry about, however. Sales of the iPhone 3G also slipped before the 3GS was unveiled last June 8 and shipped on June 19. Apple plans to introduce its next version of the iPhone OS this Thursday, and most observers predict that new hardware will appear mid-year.

But all the while that Apple's iPhone and a gaggle of Google Android phones have been grabbing all the headlines (and Palm as well, although for less encouraging reasons), RIM has been quietly churning out its popular Blackberries, and - in this last reported quarter, at least - extending its lead. ®