Swiss adventurer Bertrand Piccard today moved one step closer to fulfilling his ambition to fly a solar-powered aircraft round the world as his Solar Impulse completed its first full-fat test flight. 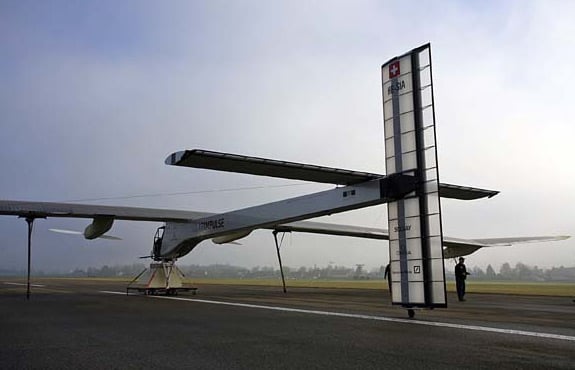 The Solar Impulse boasts a wingspan as wide as a Boeing 747, with 12,000 solar cells powering four electric motors which lifted it off the runway in Payerne, Switzerland, for a one-and-a-half hour flight designed to see if the thing would actually fly in a straight line - critical for a vehicle with little power for manoeuvre.

It did, and test pilot Markus Scherdel further "completed a series of turns, building up bank angles of up to five degrees to learn more about the handling characteristics of the plane" before bringing the aircraft down for a perfect lunchtime landing.

Further flight tests will now follow leading to the construction of the final round-the-world version which Piccard and co-pilot Andre Borschberg hope will transverse the globe in 2012 at a sedate 44 mph average speed.

The trip will be divided into five stages of up to five days continual flight per hop, punctuated by rest stops along the way.

The €70m Solar Impulse project is designed "to contribute in the world of exploration and innovation to the cause of renewable energies" and "to place dream and emotion at the heart of scientific adventure".

Piccard and Borschberg certainly have the right stuff to inject a bit of adventure into the realm of scientific advancement. The former is described as a "psychiatrist and aeronaut, who made the first non-stop round-the-world balloon flight", while the latter's CV lists marks him as "an engineer and graduate in management science, a fighter pilot and a professional airplane and helicopter pilot". ®