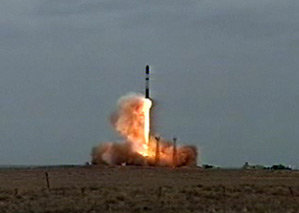 The lift-off went as planned at 13:57 GMT, and the Dnepr missile sent Cryosat-2 on its mission to precisely gauge "the changes in the thickness of marine ice floating in the polar oceans and variations in the thickness of the vast ice sheets that overlie Greenland and Antarctica".

The satellite's predecessor, Cryosat, was lost back in 2005 after a failure of the launch vehicle, but ESA judged the mission to be "even more important than when it was first selected for development, and the decision to rebuild was taken".

Cryosat project manager Richard Francis admitted before the launch: "One will be nervous. But it will be so exhilarating when the spacecraft finally makes it into orbit and we get the first contact with it, the thing we didn't get the last time."

The sat will now settle into an "unusually high-inclination" orbit at a mean altitude of 717 km, swooping as far as 88° latitude north and south to characterise the "trend towards diminishing ice cover". 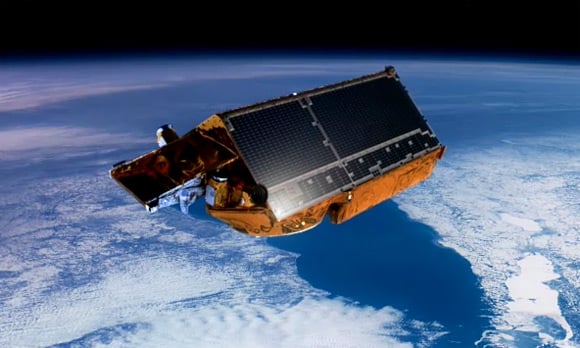 ESA explains: "With the effects of a changing climate fast becoming apparent, particularly in the polar regions, it is increasingly important to understand exactly how Earth’s ice fields are responding. Diminishing ice cover is frequently cited as an early casualty of global warming and since ice, in turn, plays an important role regulating climate and sea level, the consequences of change are far reaching."

The BBC notes that the "complexity of behaviour" of sea ice has proved "very difficult to model", and that "cold temperatures and strong winds saw the area of Arctic Ocean covered in ice this winter reach near-'normal' levels" compared to a 1979-2000 average.

Cryosat-2 will measure the thickness of floating ice "freeboard" - the bit sticking above the surface - which will enable scientists to calculate the total thickness of floes by adding that to the 7/8ths of ice "draft" which is submerged.

The satellite's primary payload is a radar altimeter. ESA summarises: "Sending thousands of radar pulses to the ground each second, it precisely measures the time it takes for their echoes to return. Providing the satellite’s position in space is known to a high accuracy, these data can be used to map the global ice surface to an accuracy of a few centimetres."

The BBC summarises that the satellite has two antennae, and "by listening to the radar echoes with an additional device offset from the first by about a metre, the instrument can sense much better the shape of the ice below, returning more reliable information on slopes and ridges".

The ESA has a full run-down on Cryosat-2's instruments here. ®