Motorola will be providing wraparound covers for SIMs, enabling parents to control who their children speak to and when at the click of a mouse.

Services managing kids' communications generally rely on a compliant network operator and/or a customised handset, but Motorola reckons it has the technology to apply parental controls to any handset on any network by intercepting communication with the SIM.

Norwegian startup Bipper will provide the service. The company shamelessly flaunts the "think of the children" approach, complete with an insipid backstory about the founder's kids, but completely lacking in technical details. 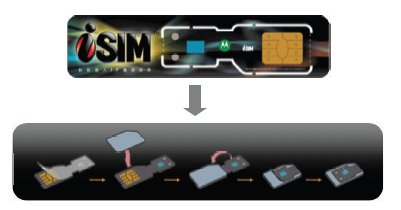 The iSIM wraps around the existing SIM, intercepting communications for the protection of ankle biters

Intercepting SIM communications isn't new - circuits of a similar nature have been used for years by hackers and those who just want to squeeze two SIMs into a single handset or play similar games. The concept gained popularity with the launch of the iPhone: a SIM-intercept chip can catch network name requests and assure the iPhone it's on the AT&T network, but these days software unlocks are more popular.

Motorola's iSIM (intelligent SIM) is an attempt to take the process mainstream, with the promise of adding SIM functionality without having to work with network operators who control SIMs completely.

Bipper is the first application to do this. Just wrap an iSIM around the SIM card and once the service is live you'll get a web interface through which you can set the permitted numbers and times your child will be allowed to call. That configuration is sent to the mobile and intercepted by the iSIM, which blocks calls to other numbers by refusing to authenticate the SIM to the phone.

Enterprising children might try ripping off the protective prophylactic, so it's probably best not to tell them it's installed. To be fair, the Bipper service is aimed at children in the six to 10 range - a demographic not known for its in-depth understanding of GSM SIM authentication procedures.

We're not sure how the handset will react to the iSIM's interference - in our experience it throws up some sort of device-dependent error message. Motorola hasn't yet responded to a request for more information, but it will certainly depend on the handset model and make.

Obviously a service like this would be better placed with the network operator, but that would open the operator to accusations of putting children at risk of deadly cellphone radiation (reality be damned). In the US Disney offered something similar, but the mouse's MVNO* failed and the idea hasn't spread widely.

As a technology the iSIM has potential far beyond controlling the behaviour of children. Network operators have been astoundingly reluctant to do anything interesting with their SIMs, but with Motorola's iSIM third parties can have a shot and hopefully we'll see something more interesting than an unlocked iPhones or a kid who can't make calls in class. ®

*Mobile Virtual Network Operator - all the fun of running a network without the effort required to build one.