'The expedition FROM HELL' 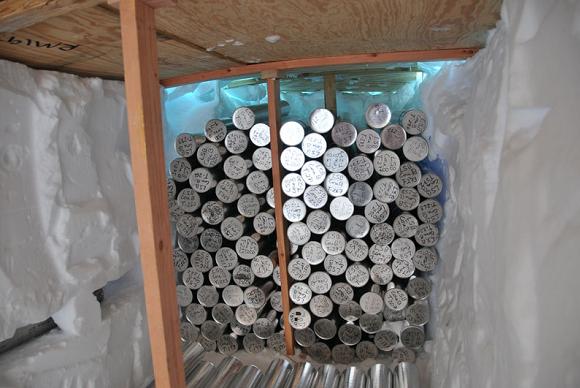 There were severe penalties for stealing cores to cool drinks.

One drill became stuck in the ice at a depth of 140m; a second, drilling a new hole, locked up at 383m. The boffins managed to modify a piece of kit intended to remove water from the drill hole to squirt antifreeze down it instead, freeing up the drill, but their problems weren't over. A drill motor broke and all three of the gearboxes brought with the expedition failed, forcing swearing scientists to build a new one out of parts salvaged from the wrecks. Supply and support flights had to be cancelled due to bad weather at the site.

"The guys on our team, Victor Zagorodnov and Vladimir Mikhalenko, engineered through each problem that arose and were really very creative," explains Mosley-Thompson.

The plucky boffins won through in the end, finally punching through to the underlying rock 445.6m below the drill rig after 28 days' gruelling effort. The resulting, record-breaking ice core was sawn up into 1m lengths and initially stored in snow trenches at the camp.

As weather permitted, the cores were flown out to the Rothera station and stashed in freezers. They will be picked up from there by a US research ship and are expected to reach America for analysis this (northern-hemisphere) summer.

Mosley-Thompson and her colleagues are hoping that their core - perhaps jointly with another 363m one drilled in 2007 by the British Antarctic Survey - will unravel the entire history of the Larsen shelf right back to the last ice age. This could help to answer the tricky question of why the Larsen shelf is behaving differently from the rest of Antarctica, and shedding ice rather than gaining it as is happening elsewhere.

Analysis of the two cores, yet to be completed, should offer some interesting insights. ®