Twice the oomph. For less

The PS701 can be plugged into IBM's existing 9U BladeCenter H chassis (which as room for fourteen blades), the 7U BladeCenter S chassis (aimed at office environments and having room for six blade and two storage modules with a total of a dozen disk drives), and the ruggedized 8U BladeCenter T chassis (with DC power and other features telcos and service providers need). 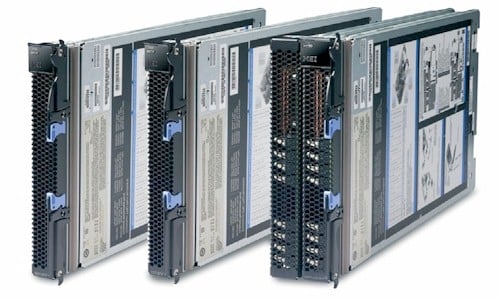 A variant of the PS701 blade called feature 8358 has the SMP expansion feature added and the service processor removed, and it is this that snaps onto the PS701 to turn it into a two-socket PS702 blade with 16 cores, 32 memory slots, and two disk bays.

A PS701 blade so loaded has a performance rating of 81.24 on IBM's rPerf (relative performance) online transaction processing benchmark test and compared quite favorably to a loaded JS23 Power6+ blade from last year, which topped out at 64 GB of main memory and an rPerf rating of 36.28 using four 4.2 GHz cores. IBM has radically dropped the clock speed, but faster DDR3 main memory and that huge 32 MB eDRAM L3 cache on chip (compared to the off-chip L3 cache on the Power6 and Power6+ designs) makes a big difference in performance. A base JS23 blade with all four cores activated, 4 GB of memory, and a 73.4 GB SAS disk cost $8,910; adding another 28 GB of memory to reach 32 GB total and the pass-through module to make a fair comparison would raise the price to $15,011. 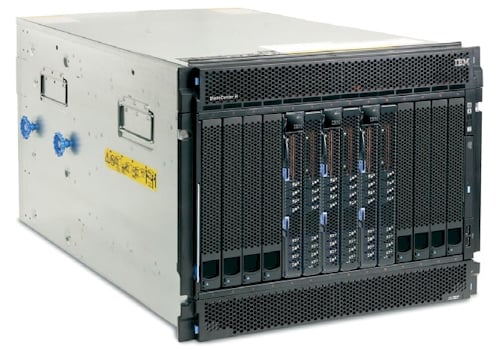 . . . you get one big happy BladeCenter Power Systems family.

When you do the math, the PS701 costs $159 per rPerf unit of performance for the hardware, while the JS23 costs $414 per rPerf. This is a big change in bang for the buck for IBM's Power blade hardware - like a factor of 2.6 better.

This is not the typical, conservative price/performance gain you see out of Big Blue.

The PS701 and PS702 blade servers support IBM's AIX 5.3 and 6.1 Unix variants provided they have the right patches, as well as its own i 6.1.1 or i 7.1 proprietary operating system - the latter of which was also announced today. The Power7-based blade servers can also run Red Hat Enterprise Linux 5.5, which was just tweaked two weeks ago to support the Power7 chips as well as all the new x64 processors from Intel and AMD. Novell's SUSE Linux Enterprise Server 10 SP3 will support the new Power7 blades, but you're going to have to wait until SP1 to get SLES 11 for these machines.