Opera for iPhone: The review

It's speedy, but is that enough?

At last. Apple approved Opera's Mini browser for the iPhone overnight, and in in a few hours it's already attracted over 150 reviews. They're not all positive, and not all accurate, but it's an indication of how much interest there is in a better browser. While Safari was the jewel in the crown of the iPhone user interface, it hasn't changed in three years. There are now 80 million iPhone and iPod Touches out in the wild, so some choice is long overdue. 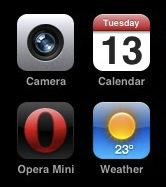 They said it was impossible...

Mini is fast, and Opera has sprung no surprises in the look and feel department. The font rendering and touch navigation - the mechanics of scrolling and zooming - aren't quite as slick as we get with Safari, but they're not far off. Mini also boasts also some very nice user-friendly features absent in Safari, such as saving web pages, searching inside a page, custom searches, and bookmark sync. And so it should...

Performance is the big draw, here. It's always been the Mini's signature feature: it was designed around speed and overcoming the obstacles to a good user experience on a mobile. Unlike the native version of Opera, Mini is really a lightweight document viewer, with the web page rendered on a proxy server, compressed, and sent down to the phone as a compact binary stream. The page is sent in large chunks, because TCP/IP's chatty, bitty nature exacerbates the latencies that are a feature of 3G networks. 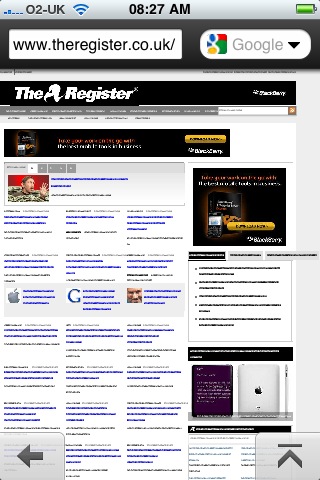 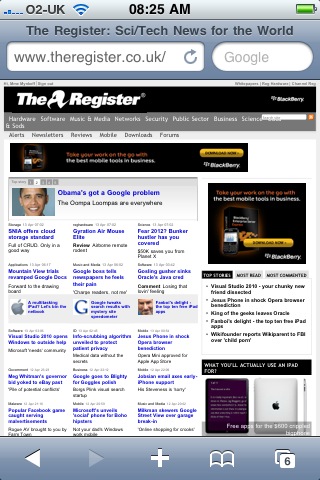 And for reference, here's Safari. Safari wins for legibility.

The speed-up is striking. My guesstimate puts it somewhere between a fifth and a third faster on a Wi-Fi connection, but dramatically faster over a slower 2G or 3G connection. That's with images on, and set to high quality. If you turn images off then it really bombs along. If I had just one wish that could be granted for the iPhone's Safari, it would be the ability turn images off. If Mini takes off, then perhaps Apple will consider it. Mini's 2G/3G performance alone should ensure its popularity, as O2 here is still largely a 2G network with 3G in patches - or feels like it, most of the time.

Mini also reloads from a standing start much faster than Safari - presenting you with the page you left in about three seconds. This will be less of an issue for owners of 3GS iPhones, 3G touches and future devices, when multitasking (sort of) arrives in the summer, but since 3G and older iPhones won't be so lucky, they'll need the rapid restarts.

This version looks and feels like Opera Mini 5 on any other device: there aren't any Apple-specific tweaks here. There may be in the future, for one or two would be welcome. It's a nice minimal interface that makes the essentials easy to access. Running full-screen reduces the bottom navigation bar to a tab.

Given the high standard set by Safari, the 'feel' of the browser is more important than the look - well, provided you can see the page. It's the 'feel' that lets down rivals such as Android's browser (bad) and Nokia's Web (worse) - panning and zooming around a page are relatively clunky. It all adds up to the sense that it isn't a deterministic system. On the rivals, you never know if the next page you want to browse will be the one that chokes the device for five minutes.

Opera comes out quite well, but falls a little short. Double-tap to zoom is present, but it tends to be over sensitive. It's like a mouse with its acceleration set too high. In addition, Mini isn't quite as accurate as on Safari, and its column selection leaves some words shunted off screen, requiring horizontal scrolling. Safari makes better use of the iPhone's graphics to render those zooms. (From the start, the iPhone's graphics chips have rendered the animations at 60 frames per second, fact fans.) 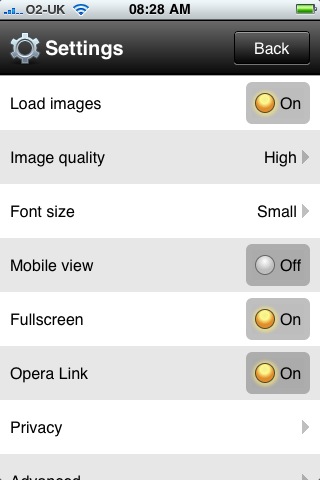 Make things even faster by turning off images

Pinch-to-zoom isn't implemented, and after a while you start to miss it.

Scrolling is less problematic, but it highlights one of Safari's great subtleties. One of the aspects that made this browser so usable was Safari's uncanny ability to scroll pages at high speed - even when the gesture was oblique, it would guess that you were scrolling, and had a high tolerance.

But in this respect, Safari and Mini are close enough, and much better than the native browsers on the aforementioned rivals. I found it strange that when loading a link, Mini performs a 'pan right' transition (the existing page appears to be shunted offscreen to the left). That might confuse experienced iPhone users, because it's the same UI gimmick Apple's Safari uses to open a new tab.

Next page: What you won't find in Safari
Page: