Review Gyration’s accelerometer technology forms the backbone of the Nintendo Wii’s Remote that supports gesture recognition, so with sort of pedigree, I was expecting big things from the manufacturer’s latest peripheral, the Air Mouse Elite. It's a wireless mouse that also functions as a remote control for your PC and whole lot more. 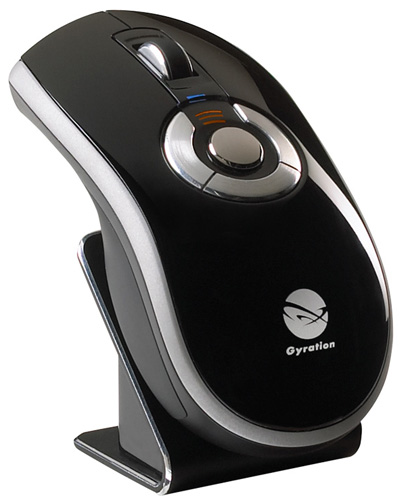 At first glance the Elite looks like an ordinary desktop mouse with its ergonomic design and scroll wheel wedged between its standard dual control buttons. Yet, when I picked the Elite up, my index finger naturally curled itself around its top-mounted trigger button that transforms the mouse into a wireless PC controller.

The Elite communicates with wirelessly 2.4GHz RF USB receiver that supports Windows, Mac OS X and Linux. However, sophisticated tasks – beyond basic in air mousery and desktop use – rely on the MotionTools software being installed, which is Windows-only.

Depressing Elite’s trigger button enables you to move the PC’s cursor across the screen simply by waving the mouse in any direction – just like using the Wii’s Remote. Switching between Firefox tabs, selecting hyperlinks and even writing this review while using the Elite as an airborne mouse was extremely easy and required relatively no user training time.

While in Airborne mode, on-screen selections are made by pressing your thumb down on the Elite’s topside right button. I never experienced cursor drift – a common problem with wireless mice – or lag time between physical and cursor movements. Indeed, Airbourne mode really makes Elite stand out during presentations because picking the mouse up and ‘waving’ your PC’s cursor across to the next slide just feels so natural and effortless. 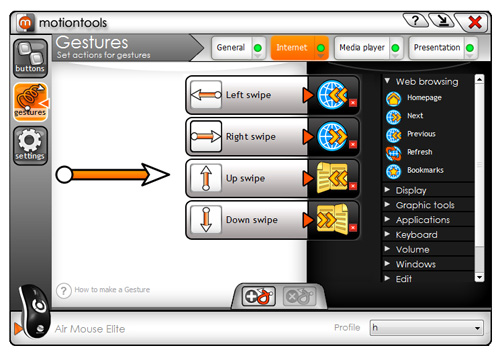 Airborne navigation is also handy when watching films on a laptop in bed, I discovered, because movies can be paused with only the slightest of wrist movements. Elite also has three programmable media buttons that let you access, say, Firefox’s Bookmarks folder or call-up PowerPoint’s highlighter tool just by clicking one button.