No guarantee of 'quick and painless execution'

An Ohio death row inmate is attempting to postpone his imminent appointment with the lethal injection gurney by claiming a possible allergy to the anaesthetic used by the state to dispatch its condemned prisoners. 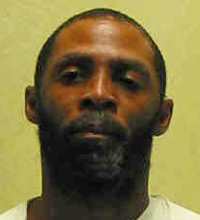 Darryl Durr (pictured) is sentenced to die next Tuesday for the 1988 rape and murder of 16-year-old Angel Vincent. He faces a single injection of thiopental sodium, rather than the traditional three-chemical cocktail used for such executions. Ohio last year became the first state to switch to the one-hit lethal anaesthesia method.

His lawyers, however, say that they've found evidence of Durr's allergy in his 800-page prison medical records. If correct, this compromises Ohio's commitment to suffering-free capital punishment.

Defense attorney Kathleen McGarry said: "One of the things the Ohio Constitution guarantees is that he has a quick and painless execution.

"If he's going to react to the anesthetic drugs in such a manner that he's going to have a violent reaction, either vomiting or seizures or whatever the spectrum is that could happen, then obviously the execution has problems."

US District Court Judge Gregory Frost has allowed Columbia University Medical Center anesthesiologist Mark Heath to review the records. Heath wrote in support of Durrs' request: "An allergic or other adverse reaction to some component of a general anesthetic might present a serious problem for an execution by lethal injection."

Heath did, though, say "it would depend on the drug that precipitated the reaction and the nature of the reaction".

Heath's conclusions are due soon, AP notes, and if the findings are favourable to his case, Durr could use them "to try to stop or delay the execution, a request the state would likely oppose".

Ohio does have a back-up plan in the event of a successful objection: an untried sedative and painkiller combination, which when injected into muscle is "supposed to produce death".

AP cites two previous lethal injection executions which proved problematic. In Texas in 1989, Stephen McCoy "reacted violently to the chemicals and began choking and seizing, despite being restrained". A state official later admitted "a heavier dose might have been warranted".

In 1992, Oklahoma prisoner Robyn Lee Parks "also had a violent reaction as the muscles in his jaw, neck, and abdomen began to spasm about two minutes after the drugs started to flow".

The cause of both reactions is "unknown", AP concludes. ®

Utes gotta be kidding me... University of Utah handed $457K to ransomware creeps

If you don't patch, the hosts driving all your virty servers are at risk. So maybe your to-do list needs a tickle?