Nobody's getting in or out without a boat for a bit

Update UK air-traffic authorities have confirmed that flights will remain grounded until at least the early hours of Saturday morning as dangerous ash clouds from an Icelandic volcano continue to blanket the nation. 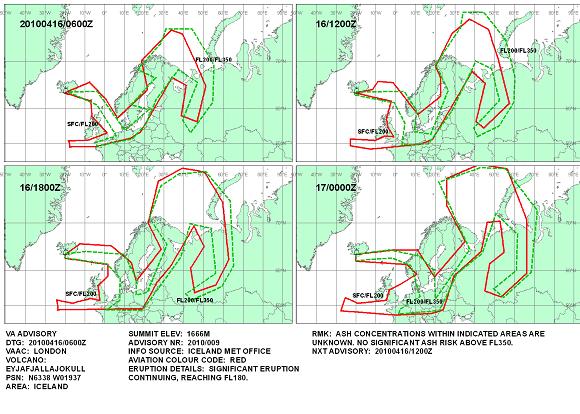 The National Air Traffic Service (NATS), currently operating a special holding website to deal with heavy traffic, confirmed at 0830 this morning that restrictions will remain in place until at least 0100 UK time tomorrow morning.

The previous assessment, that flights might resume as soon as this evening, was plainly untenable in light of the latest ash danger advisories issued by the London Volcanic Ash Advisory Centre (VAAC), responsible for issuing warnings covering airspace over the United Kingdom, Iceland and the north-eastern part of the North Atlantic Ocean.

According to the London VAAC graphic above, ash danger will still exist over all of England and much of central and northern Europe from the surface up to Flight Level 200 (that is 20,000 feet with altimeter on the standardised 1013 millibar setting) through midnight GMT tonight (0100 British local time). Parts of the area, bounded by the green dotted line, are considered dangerous up to 35,000 feet.

The London VAAC, which gets its information on the eruption from the Icelandic met service and the Nordic Volcano Institute, says that the volcano Eyjafjallajokull - source of all the trouble - is continuing to erupt and throwing a plume 18,000 feet high. Thus the decision to keep Scottish airports closed would seem sensible. Jets flying through ash clouds are liable to suffer engine failures and other critical damage such as flight-deck windows rendered opaque by dust scoring, so any sensible pilot will refuse to tangle with them.

Many jet aircraft are capable of flights above 35,000 feet, where there is "no significant ash risk" according to the VAAC. Thus flights may be able to transit across northern Europe, but will typically be unable to land or take off there.

Most people needing to travel in or out of the ash zone will simply have to wait, as frustrated air passengers have already swamped surface and tunnel routes. All Eurostar cross-channel seats are reportedly sold out, as are ferry places.

Resourceful travellers keen to get out of Blighty to points far-flung will need to get across the Channel by hastily-chartered small vessel - there could be a bonanza here for fishermen and yachtsmen - then most probably get hold of a car and drive south until reaching a functioning airport. This may be quite a long way south, as knock-on disruption to schedules resulting from cancelled flights and trapped aircraft is reaching well beyond the ash zone itself.

As an example, Toulouse airport in the south of France is showing many flights cancelled: but others headed for Spanish, Italian and North African destinations appear to be going ahead.

Nobody need panic that Blighty will grind to a halt as deliveries of air cargo etc are halted. More than 90 per cent of the nation's imports and exports actually travel by sea, so barring a few luxury perishables the shops will remain stocked and business will keep on being done.

For stranded air passengers, the European Commission advises that "EU passenger rights do apply in this situation". That is, airlines must keep passengers informed; must provide refreshment, meals and accommodations as required during the delay; and must offer a choice between reimbursement of fares or eventual delivery to the final planned destination.

However the EU cautions that, as the volcanic eruption is an exceptional circumstance and not the airlines' fault, "passengers are not however entitled to additional financial compensation that would be the case where delays or cancellations are the fault of the airline". ®

We will review further Met Office information and at 1430 (UK time) we will advise further arrangements. In general, the situation is dynamic and subject to change.