No, but it could do some naughty orbital stuff

Air Force 'Mission 3B' back on the cards?

The "some missions" referred to by the Columbia report were probably the so-called 3A and 3B flight plans (described here) which called for single-polar-orbit hops from Vandenberg, either deploying or recovering a spy satellite without any pass over the USSR by the shuttle. Later, even more difficult missions were specified by the Air Force, in which the shuttle would both deploy and then recover a spy satellite during a single mission. 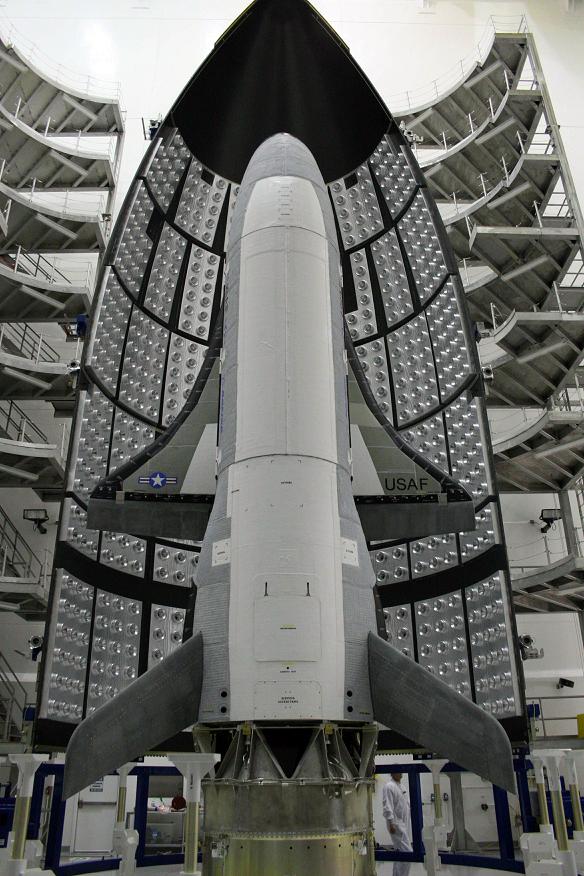 A certain Shuttle-y look about the wings.

The military spy-sat requirements have been blamed by many space enthusiasts for crippling the shuttle's design. It's argued that without its large, heavy, heatshielded wings - necessary for the cross-range re-entry requirement, rather than for actually landing as such - it might have been a much more efficient machine for putting stuff into space.

In the event, by the time the Shuttle began to fly its performance was seen as deficient for polar-orbit spysat missions lifting increasingly hefty "KeyHole" payloads. High-angle launches forfeit the valuable speed boost gained by eastward takeoffs close to the Equator, as from Canaveral, and require more grunt from the launcher. Plans were developed in the 1980s for lightened solid boosters, and even extra strap-on liquid rockets, to be used on missions out of the multibillion-dollar shuttle base at Vandenberg's Space Launch Complex Six.

Then came the Challenger disaster of 1986, which imposed years more delay and still more expense. By the time the shuttle had weathered that storm, the military had mostly turned its back on the troubled spaceplane. No shuttles ever flew from Vandenberg on polar missions, and the ambitious military plans to recover and re-use colossally expensive spy sats - perhaps modifying and upgrading them, or repairing them after faults, as one might a normal aeroplane - came to nothing.

Next page: But there are more satellites up there than just US ones
Page:
Tips and corrections
50 Comments