Sedighi recently declared: "Many women who do not dress modestly ... lead young men astray, corrupting their chastity and spread adultery in society, which increases earthquakes."

Well, Jennifer McCreight decided to put this to the test, and attempt a critical mass of immodesty primarily involving a load of women flashing a Richter-tempting amount of jub. 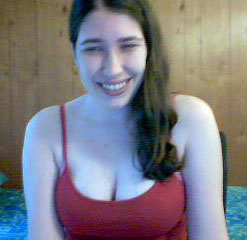 She declared: “On Monday, April 26th, I will wear the most cleavage-showing shirt I own. Yes, the one usually reserved for a night on the town. I encourage other female skeptics to join me and embrace the supposed supernatural power of their breasts. Or short shorts, if that's your preferred form of immodesty. With the power of our scandalous bodies combined, we should surely produce an earthquake.”

McCreight's picture speaks for itself, and thousands of other females have thrown their weight behind the effort to either provoke a major catastrophe or prove that Iranian clerics have a poor grasp of the fundamentals of plate tectonics.