Some details are beginning to emerge regarding the failure of an advanced US military hypersonic glider test above the Pacific last week. However, a complete picture of what happened to the HTV-2 test platform may never appear, as communications with it were lost early in the flight. 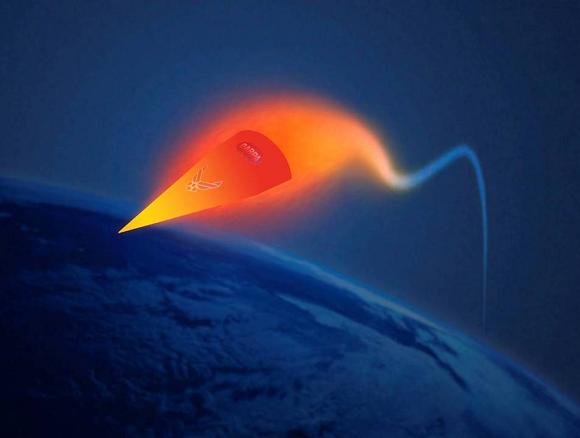 The HTV-2 was a relatively simple craft as hypersonic experiments go, being intended to test new carbon-carbon airframe technology under consideration for next generation ultrafast missiles or planes. It had no scramjet or rocket propulsion of its own, instead being fired out of the atmosphere from Vandenberg airforce base in California atop a "Minotaur IV Lite" booster stack.

It had been intended that the HTV-2 would then re-enter the atmosphere and make a hypersonic glide under autonomous control to splash down in the vicinity of Kwajalein Atoll, nearly five thousand miles from the Californian launch site. During the flight, Pentagon boffins from DARPA would learn if their new hypersonic tech - intended to be a major leap forward from that used in existing airframes like that of the space shuttle - worked as expected.

In particular, designers were hoping that the new aeroshell and control tech in the HTV-2 would allow it to glide at a lower angle of attack than the shuttle, so achieving greater range and better lift for less drag. The sharp-edged delta shaped carbon-carbon airframe, it was hoped, would resist the terrific heat of hypersonic flight much better than previous materials, though it would still burn away to some degree - losing perhaps an inch or two from the leading edges.

Lacking any database on swept-delta flights at such speeds, designers were compelled to model the aerodynamics from basic physics. Ambitiously, they sought to reduce the weight of the heatshielding by stepping away from previous designs in which the worst case of turbulent flow throughout was used.

Communications with the HTV-2 seem to have been lost shortly after it left the Minotaur rocket, just as it was entering the atmosphere.

The US air force is interested in concepts like the HTV as a means of "prompt global strike" - the ability to blow things up anywhere on the planet at short notice - or alternatively deploy other things than warheads, for instance robot spy planes. This could be carried out by a normal ICBM with a conventional warhead, or by hybrid HTV-2 type methods.

Pentagon crazytech agency DARPA also has aspirations to use technologies from the HTV programme in airbreathing scramjet missiles or even re-usable manned aircraft. The parallel X-51 WaveRider scramjet project, intended to deliver hypersonic jet engines able to run on normal-ish hydrocrabon fuel rather than troublesome hydrogen, has been delayed into this year.

However some engineers involved with it think that the X-51 engine may - in addition to working at hypersonic speeds - be able to light up while still merely supersonic. This would open the door to future runway aircraft, which would operate subsonic and supersonic using ordinary turbojets and hypersonically on scramjets. The turbojets might form part of the scramjets, as in the case of the legendary SR-71 "Blackbird" turbo/ramjet spyplane of Cold War fame.

For now, though, last week's disappearance of the HTV-2 above the Pacific would seem to indicate that DARPA's hypersonics engineers may have pushed the envelope a little too hard in their quest for improved performance.

There's more on HTV-2 from DARPA here, and a pdf statement on the test failure here, plus Aviation Week coverage here. ®

DARPA adds RISC-V to its Toolbox: Defense researchers can get special access to SiFive chip designs