SAS Survival Guide for the iPhone

The best selling SAS Survival Guide has been re-purposed for the iPhone and is selling for £3.99 ($6.99 in the US). It's already a hit at the iTunes app store, ranking no. 8 this week in the UK top grossing list. 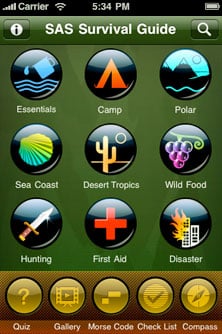 Now you can take the original set of world-class survival skills with you anywhere in the world – from the peaks of Kilimanjaro to the deserts of Kandahar…or to your closest national park.

With its checklists, first aid hints and videos of survival tips, sections on extreme climate survival, and photo galleries of edible, medicinal and poisonous plants, the guide will be welcomed by all travellers who leave the beaten track. Until the battery runs out. Which would would be, oh, a day or so.

That was a little ungracious. Who can deny that phones, even iPhones, have turned up trumps at times of peril - the trapped Haiti earthquake victim who treated his wounds by following the advice of an iPhone app bears witness to this.

Closer to home, the benefits of phones are sometimes overstated, or not, for political purposes, or not - as last year's spat over a Scottish hill rescue reveals.

If you don't have an iPhone, you could always fall back on those TV survival shows you watched. These backpackers, lost in the Malaysian jungle, found their way out by following water down stream, a simple tip they had learned from bushcraft God Ray Mears.

You can download the SAS Survival Guide here. It's in the app store's lifestyle section.