US boffins fashion quantum-computing bit out of SQUID

Federal boffins in the States say they have fashioned another building block which could be of use in assembling the postulated hard-to-understand but applecart-busting quantum computers of tomorrow. 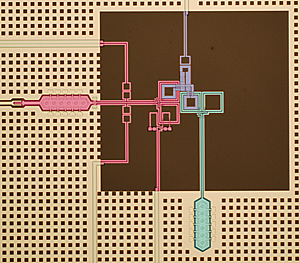 Modulate the qu-slosh with the purple bit.

In essence, the so-called "rf-SQUID-Mediated Coherent Tunable Coupling Between a Superconducting Phase Qubit and a Lumped Element Resonator" is just what it sounds like - a radio-frequency superconducting quantum interference device used in effect as a dimmer switch linking a single quantum bit of information ("a qubit") to a resonant cavity employed as a quantum data bus.

A qubit, unlike a boring old normal bit, is not simply 1 or 0 - it could be either or any value in between, just as a cat in a box may be dead, alive or in some sort of undead waveform zombie state. The curious nature of the qubit arises from the fact that it is held in the form of a single microwave photon - as any fule kno, this means that uncertainty theory dictates that one cannot determine anything about it without without changing the very thing one wishes to know.

That's about as far as our quantum physics knowledge goes here on the Reg you-call-that-a-supercomputer-check-this-out desk. But it's well known that that if it were possible to build a computer which used qubits instead of regular ones, various cunning calculations would be possible. For instance, crypto considered uncrackable today could be cracked: it might also be possible to develop superconductors which worked at much higher temperatures, which might in turn lead to many other amazing things.

Thus boffins worldwide are trying to build such a quantum computer, but it isn't easy as the handling of qubits is no simple task. But US National Institute of Standards and Technology (NIST) physicist Ray Simmonds says he and his team have made a step towards the goal with their new device. It seems that theirs is the first gadget capable of reliably hooking up a qubit to a cavity suitable for use as a data bus.

"We have three different elements all working together, coherently (in concert with each other) and without losing a lot of energy," says grad student Shane Allman, one of Simmonds' team.

The NIST gizmo is fashioned of aluminium laid on a sapphire chip. In the graphic above, the qubit is in pink, the cavity bus is in green and the SQUID switch is purple. According to a statement issued by NIST:

The circuit is created with a voltage pulse that places one unit of energy—a single microwave photon—in the qubit. By tuning a magnetic field applied to the SQUID, scientists can alter the coupling energy or transfer rate of the single photon between the qubit and cavity. The researchers watch this photon slosh back and forth at a rate they can now adjust with a knob.

Full boffinry detail on the new quantum subassembly will be provided in a forthcoming paper to be published by Allman, Simmonds et al in the journal Physical Review Letters under the title rf-SQUID-Mediated Coherent Tunable Coupling Between a Superconducting Phase Qubit and a Lumped Element Resonator. ®