RHEL 6 - your sensible but lovable friend

Review The first major update for Red Hat Enterprise Linux in more than three years hit last month, and judging by the traffic that took down Red Hat's download servers, it's long over due.

RHEL 5 came out in March 2007 with the Linux 2.6.18 kernel and while incremental updates have added kernel updates and new features, it's showing its age.

Of course, the whole point of running an enterprise distro like RHEL is that it isn't Ubuntu or Fedora, and it doesn't completely change all the rules every six months.

Still, there's a balance to be had, and even by enterprise standards RHEL 6 is a long time coming. But the RHEL 6 beta is here and the good news is that there's plenty to love.

For RHEL 6, Red Hat is using a Fedora development release based on the Linux 2.6.32 kernel - technically, it's a hybrid of several recent kernels. Red Hat engineers have hardened the Fedora base and added quite a few features - with a strong emphasis on virtualization.

One of the main goals for RHEL 6 was to make managing virtual servers as easy as managing physical machines, which means the bulk of the new software features are found in KVM. It also means that Xen is gone, though that's hardly surprising since Red Hat purchased Qumranet - creators of KVM - back in 2008. 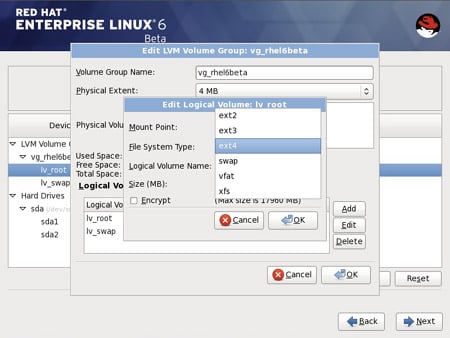 A wide selection of disk formatting options include ext4

RHEL 6 builds on the KVM-based virtualization found in RHEL 5.5 and earlier releases, adding a number of performance and hardware support upgrades.

Also new for virtual guests is the SELinux sandbox feature that allows guest machines to run in isolated environments. The new sandbox features can be applied to just about any untrusted code you'd like to execute, but it's particularly handy with virtual machines.

Other improvements in the beta include changes to the way RHEL 6 handles multi-core chips. In theory, RHEL could use 64,000 cores in a single system image. Along with the better multi-core support comes the same support for new chip architectures that we saw in RHEL 5.5, including Intel's Xeon 5600 and 7500 and the Power7 from IBM.

Another big change in the RHEL 6 beta is the wide selection of disk formatting options, including ext4. You know a Linux feature has arrived when it makes its way to the conservative enterprise releases like RHEL and such is the case with ext4 file system, which is now the default filesystem format in RHEL 6. In addition to ext4, the XFS filesystem is now supported.

Next page: What ever you want
Page: