Love means never having to say you're 100% proprietary

Adobe now says it loves Apple. But that's just a way of getting your attention so it can point out that it doesn't love Steve Jobs' pathological efforts to control the world's developers.

On Thursday morning, Adobe launched a new ad campaign in newspapers across the globe that catches the eye with an apparent change in attitude towards Steve and cult. A month after Adobe platform evangelist Lee Brimelow told Apple to "go screw itself" - and just a week after Adobe CTO Kevin Lynch painted Steve Jobs as Big Brother - the Flash-happy outfit expressed some large-type affection for Cupertino: 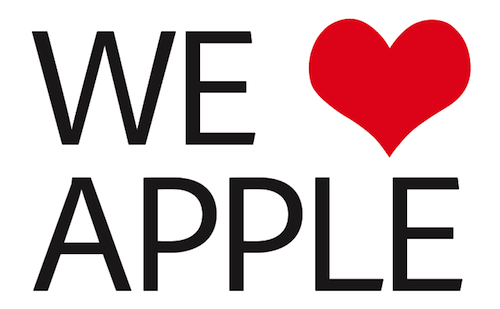 But this love is complicated. The ad goes on to say that Adode loves creativity and innovation, apps, the web, touch screens, and HTML5. But it also loves "authoring code only once." It loves "all devices" and "all platforms." And it doesn't love "anybody taking away your freedom to choose what you create, how you create it, and what you experience on the web." 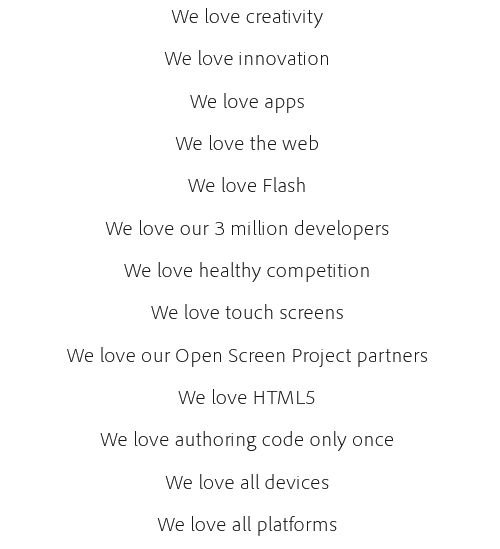 From the beginning, Apple banned Flash from the iPhone, along with all other interpreted code. So, in early April, with its Flash Professional CS5 development suite, Adobe introduced a tool that translates Flash script into native iPhone code. But just before the suite's release, Apple barred such code translation with a change to its iPhone SDK, and in recent weeks, with an open letter on Flash, Steve Jobs confirmed that the change targeted Flash in particular. Jobs, you see, doesn't want developers building applications with code that also runs on devices he didn't build. 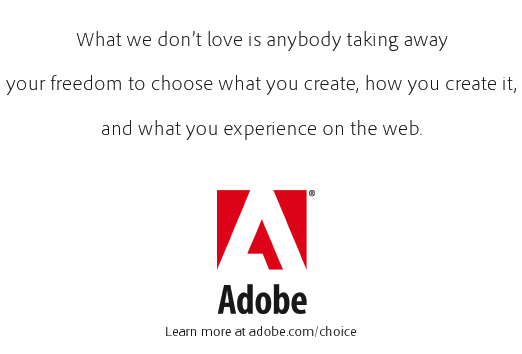 Adobe's ad also points readers to a new website - adobe.com/choice - where it continues its rather obvious counterpunch to Steve Jobs' infamous "Thoughts on Flash" missive. "At Adobe, we believe that the open flow of creativity, ideas, and information should be limited only by the imagination," the site says.

"Innovation thrives when people are free to choose the technologies that enable them to openly express themselves and access information where and when they want. Everyone loses when technological barriers impede the exchange of ideas."

Notice the use - twice in two sentences - of the word "open." With his letter, Steve Jobs also said he had banned Flash from the iPhone and iPad because Flash is closed and "100% proprietary," because Apple believes in open standards like HTML5, CSS, and Javascript. Thus, Adobe is determined to show that it also believes in open standards, and that it's much more open than a cult that seeks to control what languages a developer codes in.

"Openness is at Adobe's core," the company continues. "We believe open markets that allow developers, publishers, and consumers to make their own choices about how they create, distribute, and access content are essential to progress. That's why we actively support technologies like HTML4, HTML5, CSS, and H.264, in addition to our own technologies."

Adobe even pulls out an open letter from founders Chuck Geschke and John Warnock in an effort to prove how open the company is. And they actually use the A**le word. "When markets are open, anyone with a great idea has a chance to drive innovation and find new customers. Adobe's business philosophy is based on a premise that, in an open market, the best products will win in the end - and the best way to compete is to create the best technology and innovate faster than your competitors," the Adobe founders say.

"We believe that Apple, by taking the opposite approach, has taken a step that could undermine this next chapter of the web - the chapter in which mobile devices outnumber computers, any individual can be a publisher, and content is accessed anywhere and at any time."

They even go so far to argue that Flash is not 100 per cent proprietary. "We publish the specifications for Flash - meaning anyone can make their own Flash player. Yet, Adobe Flash technology remains the market leader because of the constant creativity and technical innovation of our employees."

Many are siding with Apple in this epic war of words and acronyms. And many others are siding with Adobe, including Google, which will soon bundle Flash with its Chrome browser and with its Android mobile operating system. But perhaps we can all agree on one thing. If the word "open" wasn't dead already, it is now. ®