American boffins say that they have created tiny robot spiders or "walkers", each one of which is a single complicated molecule fashioned out of DNA. They have managed to get the molecular nanorobospiders to follow a trail of DNA "breadcrumbs". 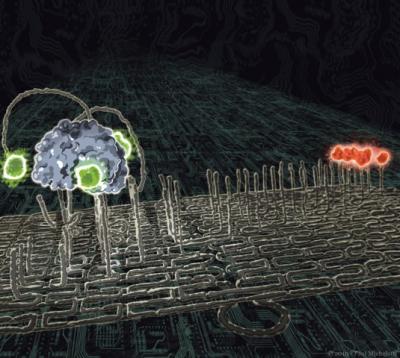 The sticking-up bits are the breadcrumbs, the red thing is the target.

The central body of the spider is a protein molecule called streptavidin, which has the handy property of coming with four attachment pockets into which can be plugged a "chemical moiety" called biotin. The legs of the spider are fashioned of DNA strands tipped with biotin. (These are four-legged spiders.)

The clever bit comes in the DNA legs. Three of these are designed to bind their other end onto a particular other sort of DNA, cutting it and then so freeing themselves again.

"In normal robotics, the robot itself contains the knowledge about the commands, but with individual molecules, you can't store that amount of information, so the idea instead is to store information on the commands on the outside," says chemistry prof Nils Walter.

Walter and other top nanospider experts did this by attaching bits of the type of DNA favoured by the waving spidery legs to a chain of molecular origami scaffolding, itself a tricky piece of boffinry.

Releasing a spider at the start of the trail of DNA breadcrumbs, its waving tentacles would seek out the tempting treats and so pull the nanomachine forward. As each "leg" bonded to a "breadcrumb" it then cut itself free and began to seek out another.

Using a cunning mixture of atomic force microscopy and single-molecule fluorescence microscopy the assembled boffins were able to watch their nanomachines at work.

Previous DNA walkers could take only two or three steps, apparently, but "this one," says biochemistry prof Hao Yan, "can walk up to about 100 nanometers. That's roughly 50 steps."

The idea is that with the tools and techniques developed in studies like this, boffins will be able in future to carry out some amazing feats.

"You could imagine the spider carrying a drug and bonding to a two-dimensional surface like a cell membrane, finding the receptors and, depending on the local environment," adds Yan, "triggering the activation of this drug."

That kind of thing could offer a cure for cancer, as nanobots would be able to attach to cells, tell if they were malignant, and if so kill them.

Alternatively, legions of nanobots could be used to craft elaborately tailored molecules or nanoscale structures, creating drugs, circuitry or materials with new properties - or repairing damaged tissues within the body.

"This may be 100 years in the future," warns prof Milan Stojanovicm who worked with Walter and Yan on the recent nanobotics effort. "We're so far from that right now."