Operating systems I have known

First, it was Windows Vista on the iPhone. Now, an even earlier Microsoft creation has been updated for the smartphone set.

Windows 3.1 launched in 1992, bringing Windows to the mass market and paving the way for Windows as we know it today. Windows 3.1 added support for long file names, virtual memory, and the ability to share devices. 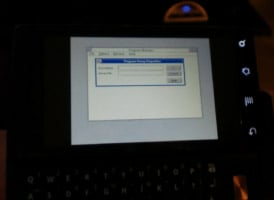 Why rehabilitate this Microsoft relic from the dawn of modern PC computing? According to McHenry, a self-confessed Android fiddler:

I realized, Hey, Windows can be installed VIA Dos. So I went on google & youtube and looked up "Windows on Android" and what do you know, No results. However, I saw a lot of videos about Windows 95, NT, 3.1, etc on a Nokia. So I thought, I want to try and put it on Android. It appears its never been done before. So I gave it a shot...

McHenry goes on to explain what he did here, but finishes succinctly: "It's completely useless, but really damn cool."

We can't help but wonder whether Windows 3.1 on Android is an omen of Android's future success. After all, the VistaPerfection 2.0 application - from another phone fiddler - gave the iPhone a Windows-Vista look, and the iPhone now has a quarter of the US smartphone market sewn up.