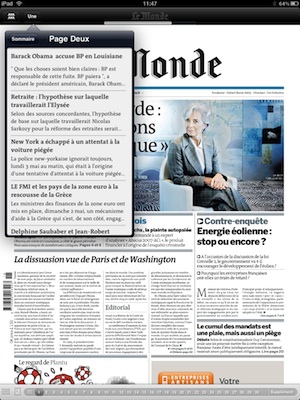 Reading a newspaper on the web is entirely not like reading a newspaper - essentially, you can't. Even if you sit down for half an hour in front of the paper's home page, solemnly trying to read today's news, new stuff will arrive while you're trying, you'll find yourself reading older stuff, missing whole sections… You can't riffle through a web site. Now, try that on an iPad. Both the apps considered here change that significantly. The FT goes for presenting you with a front page of snippets that take you through to the full story, with a back arrow on the left hand side to take you back to the front page when you've finished reading. You navigate through the paper via a secret panel (thank you, pop-up tooltip) that you get if you press the space on either side of the masthead. So press the Comment button and you get through to the op-ed spread. It's maybe worth noting that this has a list of columnists on the left hand side, but that they're not live links.

So, if I click on Wolfgang Munchau, it doesn't do anything, far less present me with a list of his recent splendidly doom-laden comments about the Euro. The fact that this doesn't happen is important, because it illustrates that the designers of newspaper apps are considering the extent to which their apps should or should not be 'webby'.

The WSJ is most definitely not webby. You can do a bit of hopping around between sections , but it's quite clearly designed with the intention that readers move through the paper (ahem again…) sequentially. There's a little 'next' button on the bottom right, and each page consists of snippets. Touch the snippet and a full story opens, and this being an American newspaper it'll quite likely have another two or three continuation pages. Touching either the article from its second page on or the bit at the bottom that says "Article continues" doesn't do anything, touching the Next button or swiping to the right does - this inconsistency could get confusing. Very nice, though, is 'pinch' - once you've finished a story, pinch your fingers together across it and it closes, and takes you back to the page you started from.

Two apps, two different approaches and sets of controls - news apps are going to have to develop a vernacular, clearly. But as they are, they both give you a distinctly newspaper-like experience, and you can sit down and read your way through them for around about the same time as you would a newspaper. That's potentially radical - average time on site for web sites, even the better performing ones, tends to be far lower than the length of time a newspaper (with the possible exception of Metro) can command your attention for.

Show us the money

It's possible that the FT and the WSJ are exceptions. Both already make good money from electronic subscriptions, so if you already have the need or desire to have one of these subs and you have an iPad, going for a iPad edition of the paper is a no-brainer. Other newspapers may not be sufficiently unique, sufficiently valuable or sufficiently specialist to command subscription revenue. 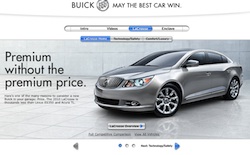 I certainly thought that would turn out to be the case before I saw the WSJ app, but the reading experience is sufficiently pleasant for me to consider the possibility that I would indeed pay for a more general newspaper. I buy the Sunday Times every week, so if the app's as good as the WSJ's, why wouldn't I buy it electronically? And I'll likely switch from the paper FT to the iPad version as soon as there's a fully packaged UK edition and I stop being worried about getting mobbed/mugged on the train to work.

There are a couple of other reasons to be optimistic on the money front. First, there's ownership of the relationship. News International objects to Amazon on the basis that it takes a substantial cut of every sale, and it handles the subscriptions itself, so Amazon knows who the customer is, while the publisher only knows that it has a customer. The FT and WSJ deal with this on the iPhone and iPad by giving the app away and charging for access, so they get all of the revenue, and the customer data, which can and will be used for offers.

The other upside is - possibly - advertising. The WSJ app is currently running full page ads in between the editorial pages, so you get to them when you turn a page just like you would with a 'real' newspaper. These ads aren't particularly ugly or annoying (although I'd be grateful if Oracle would tone down the Iron Man one), and they could surely be very expensive. Not only that, unlike display ads in real newspapers, they're clickable, and depending on the ad, people are surely much more likely to click than they would be on a web display ad. For example, although I'm personally not interested in a Buick Lacrosse (one of this week's WSJ ads) I can see that a lot of WSJ readers might be, and would therefore click for more information.

There's money here, and it might even be possible for some publications to consider free, ad-supported iPad editions.

Control versus the open internet

These apps - the WSJ one in particular - will be seen by some as a threat to openness, to the internet as we have known it. Evil Steve Jobs in cahoots with evil Rupert Murdoch trying to wall us all off from the free web and force us to pay for news. Um, but what's the big deal? Despite rumours of their demise, quite a lot of people still do pay for newspapers, even though most of the content of these newspapers (including the FT and - for now - the WSJ is available for free on the web. And even people who don't pay for newspapers will still pick up a free one on the way to and from work. Sure, if it turns out newspapers go electronic rather than being overwhelmed by a whole new revolution in the way we produce and consume news, that could severely impact the career prospects of some self-appointed new media prophets, but that's not my problem and it's not yours. It's only a newspaper, no big of a deal. ®

Obviously, not all iPad apps will be quite so 'unwebby' as the WSJ's, nor will the iPad turn out to be simply a device for passive reading. It'll be interesting to see what the Guardian does, considering the paper has bought heavily into the Web 2.0 snake-oil, and it'll also be interesting to find out how well the iPad stacks up as a notebook/netbook substitute. I ran a real netbook for quite a long time until its sad, soggy demise, and one day I'd like to meet something as capable as Psion's finest was. So maybe that's the next iPad write-up.