Size matters only so much

Microsoft has realized there's more to maintaining its lead over Gmail than shoveling buckets of storage at Hotmail users.

Today, the company unveiled changes to its Hotmail web email service, wiring the service to its Bing search engine, its Silverlight media player, and its SkyDrive online store service.

Due mid summer, the changes will let you embed Bing search results in emails along with video from YouTube and Hulu, play photos as a gallery inside an email, and exchange pictures and documents from the web-based version of Microsoft's Office suite without resorting to inbox-bustin' attachments on your email messages.

The idea is that you won't ever need to leave your Hotmail inbox to fire up a separate browser or media player to view the items somebody's emailed you. Bing search results are embedded without showing the URL. 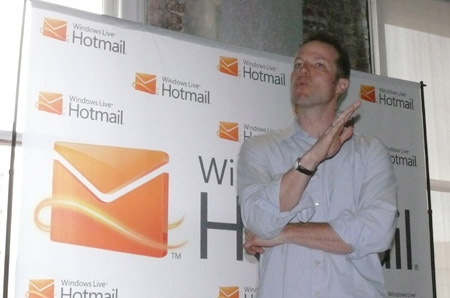 The company has also promised that Hotmail will bring a semblance of order to your inbox. A set of predefined filters will let you group emails according to who sent them, while a dialogue box will let you delete all emails from a specified address - like a newsletter spammer - and unsubscribe you from all their future emails.

Microsoft corporate vice president Chris Jones told press at the company's San Francisco, California offices on Monday that email has changed considerably thanks to social networking and the rise of link and photo sharing of links and photos and that Hotmail had to do more than simply copy Google's Gmail.

Jones didn't actually name Google but he didn't have to, In 2004, Gmail sparked a storage arms race that forced Microsoft to increase its paltry 250MB of free storage and beef up spam filters for a service that predated Gmail by eight years. Hotmail was bought by Microsoft in 1997, a year after it was launched.

Gmail has grown faster than Hotmail, but Hotmail remains the bigger email service with 360 million users, according to Microsoft, versus around 50 million for Gmail.

"We'd has spent the last couple of years adding features people expected like a really large inbox, like real important spam protection," Jones said. "We know there are a whole lot of other things we really need to add that are valuable to customers and causing them to pick other providers instead of us."

Jones said that Microsoft is responding to what people are doing with email: 95 per cent of what's on Microsoft's Hotmail storage servers is attachments, with a large percentage of those being photos and documents. Microsoft is moving to minimize the number of attachments you need, and for this, it had turned to SkyDrive and Office Web Apps.

When you attach photos, they'll will be uploaded to SkyDrive instead of duplicates being sent to each individual recipient. Recipients will then be able to view the pictures on SkyDrive.

SkyDrive is also behind Office Web Apps: you'll add an attachment for Word, PowerPoint, Excel or OneNote to an email but the document will sit on SkyDrive, where recipients can view and make changes.

There are a few drawbacks. Hotmail won't work non-Microsoft documents, such as PDF, when it's rolled out this summer. Also, SkyDrive accounts are limited to 25GB of storage, and Microsoft will delete content older than 30 days. And if you want to make edits to a Word doc or comment on a photo, you'll need to create a Windows Live ID account.

Hotmail will also let you view photos and YouTube and Hulu video inside an email using a feature called Active View. The feature uses Silverlight to display photos as a slide show. Active View will recognize URLs in an email that link to pictures on a photo sharing site like Flickr and SmugMug, and it will preview those photos in the email. Deals with other photo hosting sites were promised.

Microsoft noted that HTML, not Silverlight, is used to show and display photos through the browser on iPad, iPhone, Blackberry, Palm, and planned Windows Phone 7 devices.

A feature called QuickView will filter emails according to how you've flagged them up for later action. You can filter out photos, Office documents or - strangely - updates from organizations shipping items that you've bought online. QuickView works by searching for indicators like certain words or links in the body of message.

You can also filter outemails from your contacts, updates from social sites, messages from specific groups, or "anything else" - a catch-all for spam. ®

They grow up so fast: Spam magnet Hotmail turned 22 today

Go on. Log in one more time. Just for posterity