After 21 years in operation during which it flew some 14 airships, 21st Century was bought last year by Alabama firm E-Green Technologies, which had previously been involved in trying to market 21st Century airships to US government customers. E-Green says that the new Bullet 580 is being built to carry a joint NASA and academic survey payload intended to measure soil moisture.

E-Green adds that the Bullet will be equipped with a "Water Condensate Recovery System [which] reduces need for helium replenishment", a key requirement for airships not filled with hydrogen or hot air. Helium is expensive: but in general a ship gets lighter as it burns fuel and thus gas will probably have to be vented off to make a landing. Replacing the lost helium for another flight is costly and troublesome. 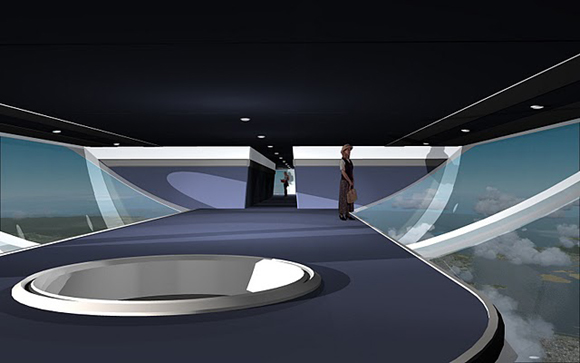 Samantha was a little disappointed at the lack of gaiety aboard.

This snag can be mitigated by the use of vertical thrust, dynamic lift generated in forward flight and/or ground effects hover/suck ducts (as seen on the Lockheed P-791 demonstrator in recent years). But a more conventional vessel like the Bullet would need an answer to the static lift problem. Most airship designers claim some trick up their sleeve in this area, usually treated as a deep secret: Colting would never divulge what approach 21st Century was taking.

However the term "water condensate" probably means the harvesting of steam from the craft's diesel exhausts to fill water ballast tanks and compensate for burned-up fuel. The US Navy's flying aircraft carriers of the 1930s used such a system, but it was an acknowledged Achilles heel of theirs. Alternative approaches include the use of neutral-buoyancy gaseous fuel (like the Graf Zeppelin in the 1930s and the TAO sperm-ship nowadays) or the mysterious "Control of Static Heaviness" gas-squash kit touted by Russo-Californian engineer Igor Pasternak.

With its NASA contract, it seems that E-Green has managed to get together enough cash to build a full-size version of Colting's design. The test inflation is being carried out inside the Garrett Coliseum in Montgomery, Alabama - "one of the few facilities large enough to host the operation". The Coliseum is more normally used for agricultural shows and the like: its proprietors proudly state that it can hold 13,500 people, more than 600 horses, as many as 1500 cattle ("with milking parlor") and/or unspecified numbers of swine.

"The first flight of the Bullet 580 is planned for later this year", according to E-Green. ®