A government website this morning wrongly exposed its database hostname, password and username to anyone wishing to read up on the coalition's agreement.

The extremely embarrassing gaffe happened within about an hour of the Cabinet Office announcing the Programme for Goverment website. 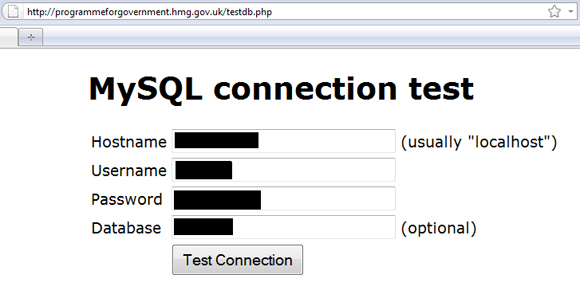 The website is, at time of writing, titsup and displaying a DNS lookup error.

"We are aware there's a technical problem, we're working to fix it," a Cabinet Office spokesman confirmed to The Register. However, he was not able to provide any further detail about what had gone wrong.

The newly-installed government led by Tory Prime Minister David Cameron and LibDem Deputy PM Nick Clegg has been bigging up its Web2.0 credentials. Arguably the coalition is trying to be even more tech-flash than the previous UK.gov incumbents.

Meanwhile, the government has reiterated the Tories' manifesto promise of creating "a level playing field" for open source software.

Hat tip to Reg readers Steven and Graham for the screen grabs.