Last last night, in an email to a Register reader, Jobs — or someone with access to his email account — pointed to a recent blog post in which a graphics developer says that VP8 "appears to be significantly weaker" in terms of compression and slower to decode than H.264, the patented codec that Apple uses for HTML5 video in its Safari browser.

Google has already started encoding YouTube videos with its open sourced codec, which has been folded into a larger media standard known as WebM, and this standard will be rolled into Google's Chrome browser as well as Opera and Mozilla's Firefox. Microsoft will not include the codec with its upcoming Internet Explorer 9, which will also use H.264, but it will allow users to use VP8 if they install it themselves.

Apple has not officially commented on WebM, which Google unveiled on Wednesday at its annual developer conference in San Francisco.

Google acquired the VP8 codec with its $124.6 million acquisition of video-compression outfit On2 Technologies this spring, and it was widely expected that Mountain View would open source the code as an alternative to the open source Ogg Theora codec currently used by Chrome, Firefox, and Opera.

Ogg Theora is based on an earlier On2 codec, VP3. In open sourcing VP8, Google aims to provide a higher-performing open source and royalty-free codec, but it seems that the On2 acquisition is also an effort to provide some added protection from patent holders. Last month, with another email, Steve Jobs said that a patent pool was being put together to "go after" Ogg Theora.

Asked whether the open VP8 is vulnerable to patent attack, Google told The Reg that it's "very confident" in the technology. In reporting this yesterday, we gently asked our readers to email Steve Jobs to ask his opinion on the VP8 open sourcing, and Kris Bloe, a software developer from Leeds, happily did so:

What did you make of the recent VP8 announcement?

At 4:30 in morning California time, according to his email header, Jobs responded: 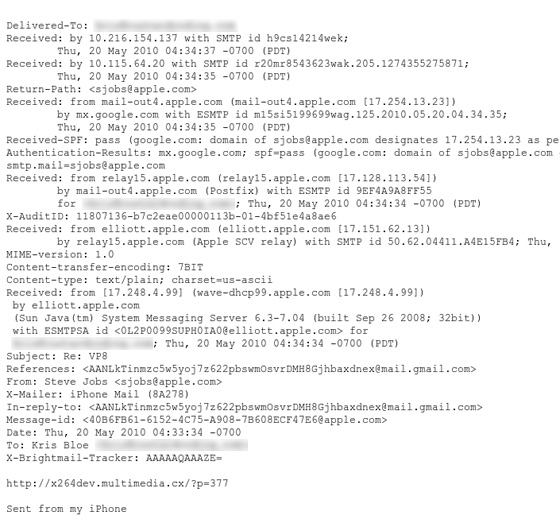 Yes, Jobs responded with a URL — one that points to a VP8 analysis by a third-year college student named Jason Garrett-Glaser, who works on the open source x264 project, a free software library for encoding video in H.264.

After obtaining early access to the VP8 spec and code, Garrett-Glaser says that VP8 is "better compression-wise" than Theora, but he also says that the codec is "not ready for primetime." Among other things, he calls the spec "a mess," and he says that as a decoder, VP8 "decodes even slower than" the H.264 decoder provided by the FFmpeg project. FFmpeg, he adds, is slower than other state-of-the art H.264 decoders.

"This probably can’t be improved that much," he says, referring to VP8 decoding capabilities. Google is unlikely to change the VP8 spec, but it and partners will continue to develop the software itself.

Garrett-Glaser also questions whether VP8 could stand up to a patent attack. "With regard to patents, VP8 copies way too much from H.264 for anyone sane to be comfortable with it, no matter whose word is behind the claim of being patent-free," he says. ®