Pic A gigantic rumbling stone ball as big as a three-storey house has thundered across the surface of the moon, smashing through a crater wall before coming to rest deep in the lunar pockmark's interior. 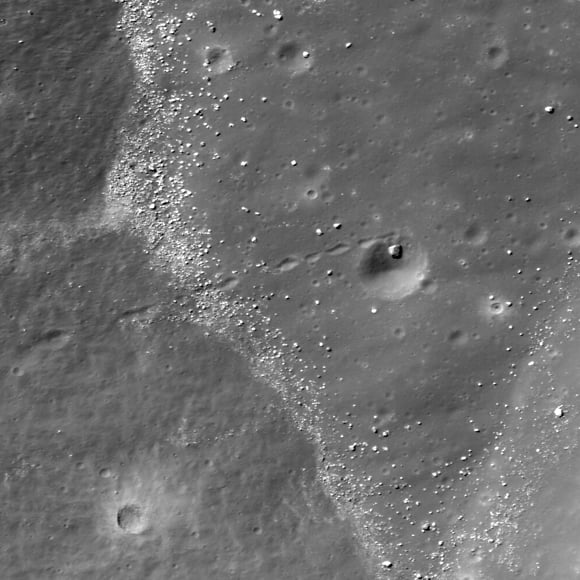 In the end the Clangers' lids just weren't strong enough.

The lunar juggernaut's epic career of destruction is revealed in this snap from a NASA survey spacecraft in low orbit around the Moon. It shows how the huge, 10m tall Indiana Jones-esque boulder bounced and ploughed (soundlessly of course on the airless moon) down a slope. Just as it was coming to rest it found itself teetering on the edge of a small 60m crater like a billiard ball on the lip of the pocket - and then it fell in.

The pic, from NASA's Lunar Reconnaissance Orbiter (LRO) is part of a huge and detailed lunar survey now underway. This has also seen other interesting events like the famous polar bombing mission in search of possible lunar iceberg mines, and the discovery of two long-lost Soviet nuclear/solar moon rovers - one of them nowadays owned by a wealthy games developer.

Rolling boulders of the sort seen above are reckoned interesting among selenologists as their original positions can often be identified by backtracking along the trail they leave. One such boulder was sampled during the Apollo 17 landing and then so backtracked, apparently furnishing some handy gen on rock formations up the slope.

The renewed modern surveys have come about because it was planned under the previous US administration that humans would return to the moon in the near future, as a precursor to voyages to Mars and the asteroids.

However, the moon-mapping efforts have now been rendered somewhat irrelevant as President Obama has lately decreed that there will be no return to the moon. Instead under his plans - reliant on a new heavy-lift rocket as yet unspecified, rather than the now-cancelled Ares V - astronauts will be sent first to an asteroid.