Murdoch's paywall: The end of the suicide era?

Staggering on could count as success

The paywall doesn't have to pay

It all depends on what you mean by 'success'. The size of the audience will shrink dramatically, but then as we pointed out here, much of the audience for a general purpose newspaper isn't really worth anything.

The Times is charging £2 a week for access. Some estimates put the amount of online advertising gathered by the Times at under £20m a year. So if 'success' means matching today's online ad revenue with online subs, then Murdoch needs about 175,000 people to suddenly acquire the habit of paying for stuff online. 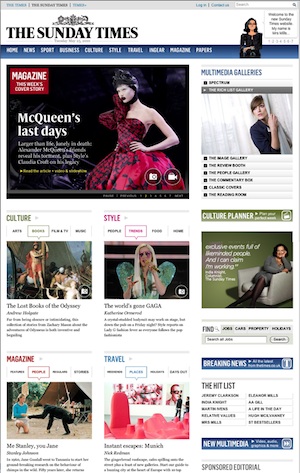 But maybe this isn't the plan; there are other measures of success. When the techno-utopian Web 2.0 crowd asked the newspapers to commit suicide by giving away everything for free, there was no need for the newspapers to pay any notice. Remember that the Times has an average of over 600,000 people giving it a pound a day, every day (Saturday's is £1.50), and from that you can start to build a business. Making up £20m in gross revenue is a lot easier from people who already pay you money. In fact, it requires about 50,000 more people (on average) to start paying for the daily Times to meet the revenues likely to be lost from going behind a paywall. Obviously there are several titles in play, and very obviously, we're talking about gross revenue not margin, and (in theory) margins are greater on the web (or should be).

Is finding 50,000 Times readers so difficult? The paper has lost around 80,000 paying customers since 2006, when it opted for the pastel colours, and expanded its web presence. Go figure.

The great paywall adventure may go wrong for all kinds of reasons: the stuff isn't as unique or compelling as News International thinks, perhaps, or the price is too high. As I said, the debate is coloured by the fact that Murdoch is a ritual hate figure for some people. Unfortunately this tends to affect people's judgement. Many more actually wish it would work, though they're loathe to admit it. And whatever else Murdoch may be, he certainly isn't stupid.

So perhaps 'success' here is 'not committing suicide' and merely involves getting people to pay real money for your real product. ®