Council tells 'em to turn it down

Office drones around Soho's Golden Square have complained to the council about the racket caused by Microsoft's ongoing attempt to attract more users to Hotmail through the medium of dance. 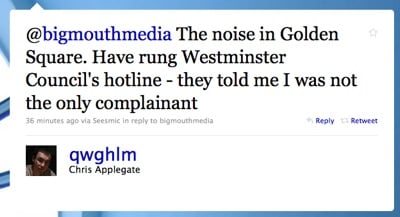 Vulture Central is within spitting distance of the square where Hotmail flacks have set up shop for the day, so we took the opportunity to find out what all the fuss was about.

This picture taken at around 2pm today, shows how unpopular Microsoft's presence is among the natives, who normally swarm to the patch of grass and benches just off Brewer Street to eat their macrobiotic lunches. 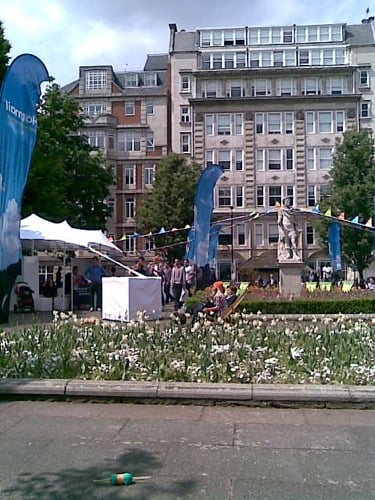 Empty is the New Busy

So far the Hotmail team, inexplicably adorned in woolly orange hats and red lumberjack shirts, have unleashed morris dancers, jugglers and urban body poppers on the uncharacteristically empty square. All of which has been backed up by a pretty noisy sound system that has clearly irked some local residents.

A Westminster City Council spokeswoman told The Register that it had received three complaints about the event. A noise officer was dispatched to the area, and told Microsoft to turn the volume down, which it duly did.

The event will go on until 7pm today, and Microsoft plans to dispatch its marketing mob to Canary Wharf and Liverpool Street later this week.

We at El Reg advise Londoners to ready their ear plugs. ®