US government aerospace agencies have achieved the world's first hypersonic scramjet flight using hydrocarbon fuel. The test did not go perfectly, but further flights will follow; organisers said they were "ecstatic" with progress thus far. 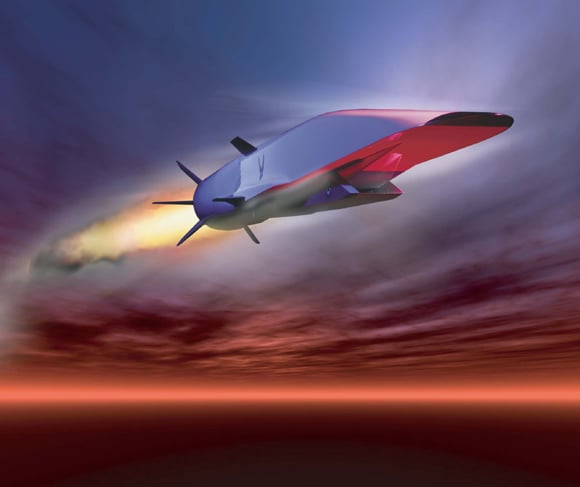 The X-51A "Waverider" craft was dropped from a modified B-52 bomber test mothership 50,000 feet above Point Mugu sea firing range off the California coast at about 6pm last night UK time (10am local). Four seconds later a rocket booster taken from a tactical missile fired, accelerating the Waverider to Mach 4.5 before being jettisoned. The airframe doesn't work like a normal aeroplane: it actually surfs on the sonic shockwaves trailing back from its nose, hence its name.

The hypersonic X-51A ignited, burning a mixture of ethylene and JP-7 jet fuel, and once well alight switched over to all-jetfuel operation. Normal turbojets can't operate at hypersonic speeds; the Waverider is a ramjet, whose intake air is simply scooped in at the front due to its speed rather than being crammed in by compressor blades.

But normal ramjets have to slow that air down to subsonic speed inside themselves so as to avoid blowing out the flame in their combustion chamber. This limits them to a top speed of perhaps Mach 3.5. The Waverider, though, is a scramjet - a supersonic combustion ramjet - which lets the air blow through it supersonically. It is thought by its designers to be capable of burning for 300 seconds to reach Mach 6.

The X-51A didn't fulfil that potential yesterday, however. Having lit up it burned for around 200 seconds, reaching approximately Mach 5 and climbing to 70,000 feet. According to a statement issued by Boeing (whose Phantom Works plant built the Waverider):

Something then occurred that caused the vehicle to lose acceleration. At that point, the X-51A was terminated as planned.

It's possible to speculate that the flame in the Waverider's SJY61 scramjet, built by Pratt & Whitney Rocketdyne, simply blew out. Project officials are still happy with the test, and seem confident that they will be able to achieve the designed speed before running out of test craft - there are three more.

"We are ecstatic to have accomplished most of our test points on the X-51A's very first hypersonic mission," said Charlie Brink, X-51A honcho at the US Air Force Research Laboratory.

"No test is perfect," he added. "But anyone will tell you that we learn just as much, if not more, when we encounter a glitch."

Next page: If they can sort it, we may see Son of Blackbird (SR-71) return
Page: