Too small for a proper mothership at ~10m, though

NASA boffins report that an unknown object approaching the Earth from deep space is almost certainly artificial in origin rather than being an asteroid. 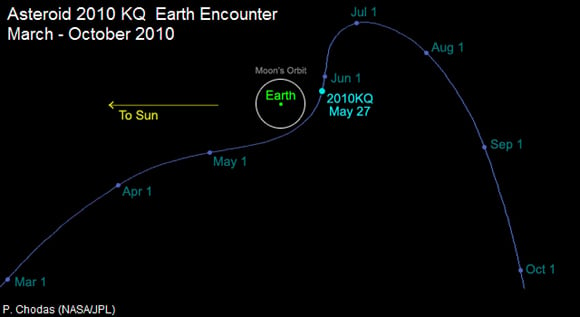 Not actually an asteroid, according to NASA, but artificial.

Object 2010 KQ was detected by the Catalina Sky Survey in Arizona earlier this month, and subsequently tracked by NASA's asteroid-watching service, the Near-Earth Object Program headquartered at the Jet Propulsion Laboratory in California.

According to the NASA experts:

Observations by astronomer S J Bus, using the NASA-sponsored Infrared Telescope Facility in Mauna Kea, Hawaii, indicate that 2010 KQ's spectral characteristics do not match any of the known asteroid types, and the object's absolute magnitude (28.9) suggests it is only a few meters in size.

The mysterious artificial object has apparently made a close pass by the Earth, coming in almost to the distance of the Moon's orbit, and is now headed away again into the interplanetary void. The object has used no propulsion during the time NASA has had it under observation. However the spacewatch boffins believe that it must have moved under its own power at some point, given its position and velocity.

"The orbit of this object is very similar to that of the Earth, and one would not expect a [naturally occurring] object to remain in this type of orbit for very long," said Paul Chodas, a brainbox at JPL.

The experts believe that the object must be a spacecraft, or more accurately part of one - sadly not an alien visitor, though. Rather it's likely to be a booster stage from an interplanetary mission of the past, now drifting back in to Earth and out again. The next visit will probably be 2036, at which time there's a small chance that 2010 KQ will crash into the atmosphere and burn up. ®