'Off with their widgets!'

The Apple App Store police are now rejecting iPhone and iPad applications for behaving like "widgets" and "creating their own desktops," according to one developer who's busy eating his previous claims that Apple isn't evil.

In late April, an unnamed Australian — one of a small team of cross-platform developers known as Shifty Jelly — made a point of telling the world that the Apple App Store is a mighty wonderful place. "I love the app store and the amazing hassle-free distribution it provides and I only really have a few niggling concerns with how Apple has dealt with us, as developers," he wrote in a blog post entitled "Sorry Media, But Apple Isn’t Evil."

But little more than a month later, this outspoken Aussie has accused himself of talking nonsense after the Jobsian cult said it was booting his company's photo-centric iPad application, My Frame, from the App Store. "A month ago I wrote a blog post about how Apple were not actually evil, because I was getting sick of all the media hype and bashing that was going on," he now says. "Little did I know that a month later that blog post would come back and smack me in the face."

MyFrame, from Groundhog Software, layers various data and tools atop digital photos as you view them on the iPad, and three successive versions of the app were previously approved by the App Store police. But on Monday, the police called to say they'd changed their minds, accusing the app of being too widgety. The app is still available from the store, but Apple has apparently told GroundHog it's coming down.

"They refused to be pinned down to an exact reason, simply stating that they were doing a cull of any applications that presented widgets to the user," reads the Aussie's blog post. "All the guy on the phone would say is how much he liked our application, and how sorry he was, but there was nothing he could do. All we got out of him was that Apple no longer liked ‘widgets’ and wanted all widget apps removed."

Previously, this coder had scoffed at media claims that Apple's approval process was "murky." But he now says that dealing with the company is like falling down a Carrollian rabbit hole. "Our application is being removed for a very murky reason, one which is nowhere to be found in any documentation that Apple give us developers, even worse one which Apple themselves refuse to explain, or put in writing. Reminds me a little of Alice in Wonderland: 'I think I should understand that better, if I had it written down: but I can’t quite follow it as you say it.'"

But he couldn't help but appeal to the App Store's Queen of Hearts. Embracing the web parlour game of the moment, he sent an email to Steve Jobs (sjob@apple.com – feel free to have a go):

Just got a phone call from Apple letting us know that our iPad app ‘My Frame’ is being removed from the store. Apparently Apple is cracking down on ‘widgety’ type apps. Our app is a beautiful photo frame with a few nice things you can put over your photos. It’s not ugly, or even widgety.

What gives? I’ve always defended you guys in the past, but it seems like you’ve crossed an invisible line here, even the guy on the phone was saying how much he likes our application but that there’s nothing he can do?

We are not allowing apps that create their own desktops. Sorry.

Sent from my iPad

The coder wrote back, claiming it all made sense before pointing out that it didn't"

Understand, but don’t agree…besides all of which our application (My Frame) is a photo frame, not a desktop environment. Your people won’t even tell us what we need to remove to get approved, they are just kicking us out. Put yourself in our shoes.

We would argue that the he doesn't understand at all — which is completely understandable. Per usual, the Jobsian logic is rather muddled. If you take a peek at MyFrame, you'll notice that in layering tools atop a photo, it does look a bit like a desktop: 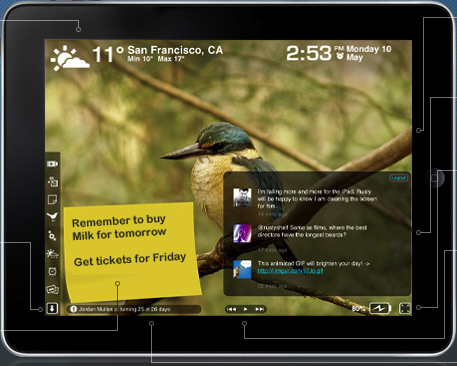 But you get much the same impression when you load up Microsoft's Bing or Adobe Ideas or Major League Baseball's iPad app. What is a desktop but a user interface, and all apps have a UI. A ban on widgets is somewhat understandable — given Apple's existing ban on multitasking. But MyFrame isn't that kind of widgety.

The App Store police have been known to reject applications for "duplicating Apple functionality," and this would seem to be the rational for barring at least one effort to add a widgety dashboard interface to the iPad. But this provides little solace to our favorite Lewis Carroll-quoting Australian application developer, who — like so many others — has woken up to the fact that Apple maintains its own reality.

"How can a company be prepared to invest into a platform that can change at any time, cutting you off and kicking you out, with no course of action but to whine on some no-name blog," he writes. "There is no alternative platform, despite what others may say about Android, it’s immature and their app store(s) are a wild west nightmare. It really is Apple’s way or the highway, and that really stinks. Badly. Very badly. Apple is the angry queen from Alice in Wonderland, screaming 'Off with her head!' and we have little recourse but to watch their pack of card minions execute those orders." ®