The CinemaStar is the consumer electronics (CE) line, spinning at 5400rpm and having 160GB, 250GB and 320GB capacity points.

An enhanced availability drive, the TravelStar EA, designed for 24x7 operation will be available in 250GB and 320BG configurations, but not 160GB.

All these drives have a 3Gbit/s SATA interface and come with a hardware encryption option. Kyriacou said some countries restrict the use of encrypting drives and that is why it is an option and not a standard offering. The new products are designed to be direct replacements for standard, 9.5mm z-height SFF drives.

It is unusual for the maximum capacity points of 5400 and 7200rpm products to be the same and implies that Hitachi probably has a 500GB, 5400rpm, Z Series device up its sleeve. 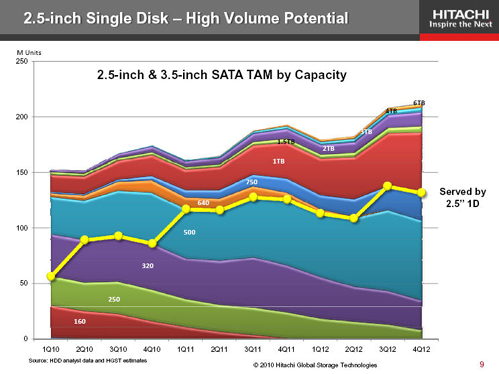 The chart above shows Hitachi GST's view of the total addressable market (TAM) for both 2.5-inch and 3.5-inch SATA drives out to 2012. The yellow line is that share of the market served by single platter 2.5-inch drives, and it rides to above the 50 per cent mark.

Another interesting thing to note on this slide are the capacity levels in the top right area: 2TB, which we have now, and 3TB, 4TB and 6TB, which we assuredly do not.

Kyriacou said Hitachi expects to ship an enterprise solid state drive by the end of the year, co-developed with Intel.

The TravelStar Z5Knnn drives are in qualification with virtually every major worldwide PC OEM. The other variants are being qualified by many OEMs as well. Hitachi GST's release had supporting comments from Lenovo and from Samsung's mobile PC and netbook marketing team which stated: “Working with Hitachi and [its] new 7mm hard drives gives us the ability to explore the limits of modern design without sacrificing capacity, performance, battery life or quality."

Most of the new drives should be available by July, but the CinemaStar and TravelStar Z7Kz320 will ship in August. Kyriacou said the Z Series will be available in Hitachi GST's distribution channel. As far as cost goes, Hitachi GST will not charge a price premium over its similar capacity dual-platter SFF drives. ®