'It's open. But it only works with Safari'

Apple is hyping HTML5 again, this time with a new website purporting to show open web development in action. But the company's standards-following rivals have pointed out the Jobsian site is peddling nonsense.

"These web standards are open, reliable, highly secure, and efficient," the site says. "The demos below show how the latest version of Apple’s Safari web browser, new Macs, and new Apple mobile devices all support the capabilities of HTML5, CSS3, and JavaScript. Not all browsers offer this support. But soon other modern browsers will take advantage of these same web standards — and the amazing things they enable web designers to do."

That may be a reference to Microsoft. But Mozilla, Opera, and Google support Javascript and parts of HTML5 and CSS3 in newer versions of their browsers. And Apple's demos only work with Safari: 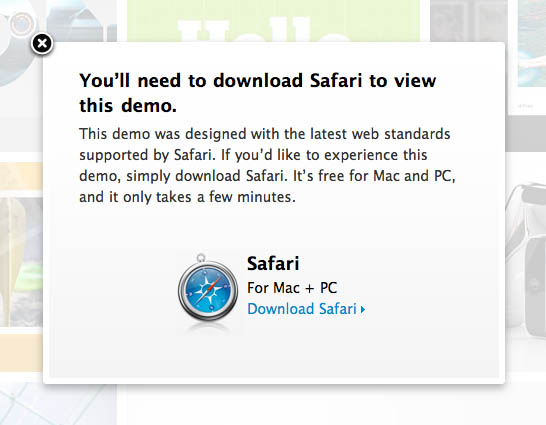 Apple will show you how to build standards-compliant apps, but only in Safari

Opera Software man Haavard Moen is not amused. "When the page doesn't work in Opera or other browsers it isn't because these browsers don't support HTML5," he blogged. "It's because Apple uses browser sniffing and vendor prefixes, and in addition to that they aren't really testing a lot of HTML5 at all. Most of their demos seem to have got nothing to do with HTML5, as a matter of fact."

According to Moen, it seems that the only parts of HTML5 in the showcase are the spec's <audio> and <video> tags.

Mike Shaver, vice president of engineering with Mozilla, the open-source operation that builds Safari-rival Firefox, was less diplomatic on Twitter. "Having difficulty suppressing my contempt for Apple's arrogant and ridiculous HTML5 positioning today," he said.

While Safari implements open standards, Apple's browser plays HTML5 video using its own CSS3 code prefixes — all vendors use their own code prefixes — and it uses the patent-backed H.264 video codec. Thus, its video demos won't work in Opera or Firefox because its two rivals refuse to use H.264, preferring open and royalty-free coding instead. Apple, along with Microsoft and others, is part of the patent pool that licenses H.264 to the rest of the world.

Meanwhile. Adobe Software was quick to pick up on the ballsy irony of it all. John Nack, Photoshop product manager, Tweeted: "A Web standards demo that doesn't work across browsers reminds me of lame, counterproductive Flash Player demos."

Apple's chief executive has been busy of late hammering as many nails as possible in to the coffin of Adobe's prized Flash Player. He has banned Flash from the iPhone and iPad, and at the D8 conference this week, he called it an old technology. Apple, Jobs said, is betting on the future: HTML5.

"The video looks better and it works better and you don't need a plug-in to run it. And while 75 percent of the video on the web may be available in Flash, a lot of it is available in HTML5 as well," Jobs said.

Jobs' D8 appearance and the HTML5 showcase are the latest chapter in Steve Jobs' very public bashing of Flash and hyping of HTML5.

Hardcore Javascripters Ext JS last week complained about Apple hammering on about HTML5 video as an alternative to Flash, saying it's starting to confuse people over what HTML5 is and what it does. Products vice president Michael Mullany said HTML5 is becoming "unhinged from reality" because a lot of what people think is HTML5 is actually CSS.

CSS is a member of a family of related HMTL5 technologies that includes Web Workers to run tasks in the background of a browser, Web Storage to store string data in a key-value pair database, and Web Sockets for server communications. The core HTML spec is mostly invisible to end users and cleans up the code while allowing what is currently done with styling, Javascript, or server workarounds to be done in HTML.

Also, after four years, HTML5 is still a work in progress and debate is still underway on some of the finer points, such as meter tags and semantic elements. ®