Arctic microbes 'could survive on Mars'

Canadian boffins say they have discovered a strange form of microbe living in remote Arctic springs which would, if taken to some parts of Mars, be able to survive there. 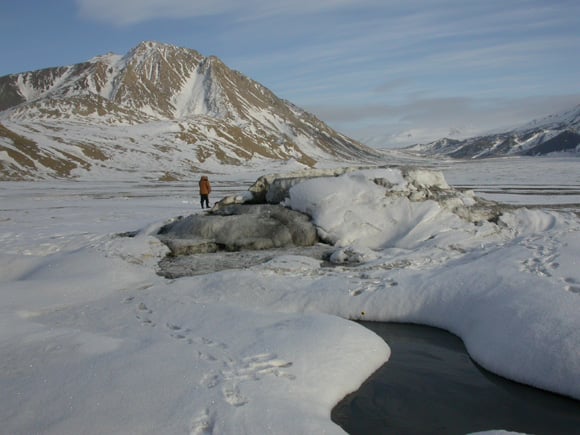 You're not going to believe it, but I've actually lost my bastard hammer

The weird lifeforms were found in a sub-freezing but extremely salty spring called Lost Hammer on Axel Heiberg Island in the far Canadian north. The Lost Hammer spring water has no breathable oxygen in it as most of Earth's water does, and as such normal marine life can't exist in it.

But the Lost Hammer spring does have bubbling methane gas, giving off a methane plume not unlike the ones recently discovered on Mars. Canadian microbiologist Dr Lyle Whyte says that it is also home to bizarre microbial life.

"[We found] very unique anaerobic organisms – organisms that survive by essentially eating methane and probably breathing sulfate instead of oxygen," explains the doc.

"There are places on Mars where the temperature reaches relatively warm -10 to 0 degrees and perhaps even above 0°C," Whyte said, "and on Axel Heiberg it gets down to -50, easy. The Lost Hammer spring is the most extreme subzero and salty environment we've found."

Recent Martian research has shown the presence of environments on the red planet similar to that in the depths of the Lost Hammer. There's nothing to indicate that the gassy, freezing waters of Mars are also home to life; but Whyte argues that his discovery shows that they could be.

"If you have a situation where you have very cold salty water, it could potentially support a microbial community, even in that extreme harsh environment," he says.

The doc's research is published in the International Society for Microbial Ecology Journal. ®

Pool of companies itching for a slice of the $2.6bn contracts has now grown to 14