Before his death, legendary Aussie reptile-botherer Steve Irwin helped to plant tracking bugs on a large number of saltwater crocodiles. Boffins analysing data from the bugs now report that the crocs, despite being poor swimmers who mainly live in shallow estuarine waters, are capable of making long ocean voyages. 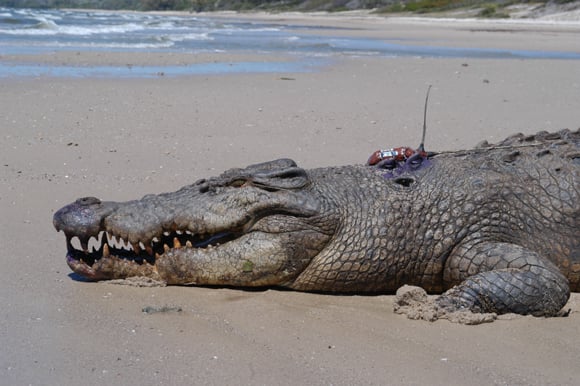 This little beaudy made a sea voyage of 590km.

According to Dr Hamish Campbell of Queensland uni, who tagged up 27 full-grown crocs with assistance from Irwin and others some years ago, the toothy creatures have managed to spread throughout the Indian and Pacific ocean by making long voyages across the open sea.

Famous crocmeister Irwin, who died after being poisoned by a stingray in 2006, was apparently instrumental in the tricky business of bugging the huge, several-metre-long estuarine Crocodylus porosi involved in the study. According to Queensland uni:

The late Steve Irwin, the original Crocodile Hunter, developed innovative capture techniques of crocodiles to ensure the team were 100 percent safe. Steve was instrumental in the strategies developed to minimize stress on crocodiles throughout the research and he was integral to the success of the research project.

The doc has gone through 1.2 million data packets from the crocs bugged by Irwin and his other colleagues, and added records from other projects too. He has logged crocodiles making open-sea journeys across hundreds of kilometres.

His analysis indicates that the crafty crocodiles don't swim much during such trips, but rather travel with the tides and ocean currents. If the sea isn't flowing the way the croc wants, it will normally beach itself somewhere handy and wait for conditions to change.

"Because these crocodiles are poor swimmers, it is unlikely that they swim across vast tracts of ocean," says Campbell. "But they can survive for long periods in salt-water without eating or drinking, so by only travelling when surface currents are favourable, they would be able to move long distances by sea. This not only helps to explains how estuarine crocodiles move between oceanic islands, but also contributes to the theory that crocodilians have crossed major marine barriers during their evolutionary past."

Five accused of trying to silence China critics in US

Logging and monitoring can be a form of bullying, and make for lousy infosec

How ICE became a $2.8b domestic surveillance agency