Occasionally, like Alexander the Great, adventurous souls living today's degenerate modern life weep because there are no more worlds to conquer. Everest has been climbed, then parachuted; the English Channel has not just been swum, but crossed by flying jetpack also; hardy golfers have played "the most remote and climatically extreme golf courses in the world... not using any caddy or cart".

Not only the great challenges offered to mankind by our home planet, but also the rather less impressive ones have been achieved. To be the first to accomplish any feat of significance, nowadays, would seem impossible. 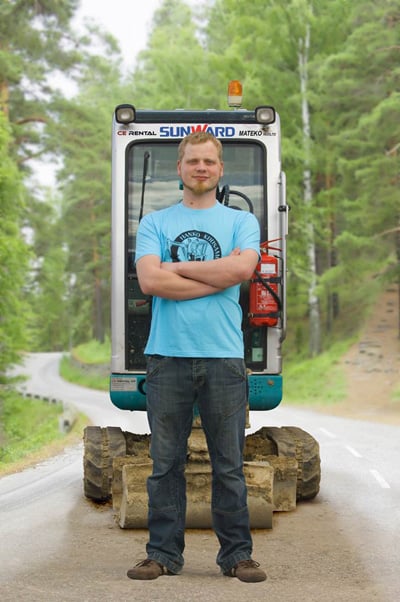 Forget about the Vikings, this is the true face of Scandinavian adventure.

But, in fact, this is not the case. All one needs to do is lower one's sights a little. Plucky Finnish excavator repairman and salesman Jukka Mutanen has done so, and is even now engaged in one of the great quests of our time: that is, to be the first man to drive most of the length of Finland mounted on a small one-man imported Chinese digger.

Mutanen, who prefers to be known to his friends as "Excavatorjack", set out on his great endeavour last week from the southern Finnish town of Hanko. Travelling at an average speed of around two and half miles per hour (his machine is capable of 2.8 going flat out), he expects to reach the remote north-Finnish finish line for the midsummer holiday celebrations on 24 June.

Floats over missile silos, shooting it down ruled more dangerous than whatever it's up to
Channel3 Feb 2023 | 36

1,000 servers capable of 240 million transactions a second, because Beijing wants to watch everything
On-Prem3 Feb 2023 | 8

Third party widgets are on the march in latest Windows Preview, which fixes some Arm64 FAILs too
Software3 Feb 2023 | 10