The internet loves nothing more than an excruciating moment of embarrassment caught by the cameras. When that moment happens to be in the middle of a World Cup match between England and the United States, well... 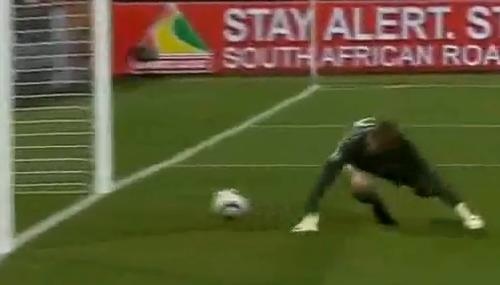 As many online viewers have pointed out, even the hoardings at the side of the pitch were urging Robert Green not to make the mistake of his career while England were 1-0 up. The warning made no difference as the hapless goalie forgot all about the previous 30 years of experience he possessed with respect to *holding a ball*.

And appropriately enough, even children understand what a dreadful fumble it was. Witness this video reconstruction of the goal filmed during half-time – just five minutes after the goal itself – and posted online as the second half began: a star in the making.

The Guardian has also got in on the fun, posting, rather bizarrely, a Lego man version of the game, with several action replays of The Green Moment.

The Internet-loving Guardian appears to draw the line at allowing others to embed its video – even though it has plastered its name all over it. So you’ll have to follow this link.

It would appear that for the duration of the World Cup, FIFA has hired an entire battalion of IP lawyers, judging by the number of videos of actual footage that have been taken from YouTube and other video sites.

For the meantime, however, here is one that appears to be working and may have slipped past officials by dint of the fact it ain’t in English:

Oddly enough, the expression of utter despair on Green’s face looks the same no matter which language you listen to.

But if you really want to know how a man who will be forever linked to the most amateurish mistake a professional goalkeeper can make actually feels, well then only one person is in the position to explain: