Those of you who fancy playing Star Wars or who have a currently unarmed shark knocking about the house might be interested in the Wicked Lasers Spyder III Pro Arctic - a real-life "lightsabre" capable of inflicting some serious damage: 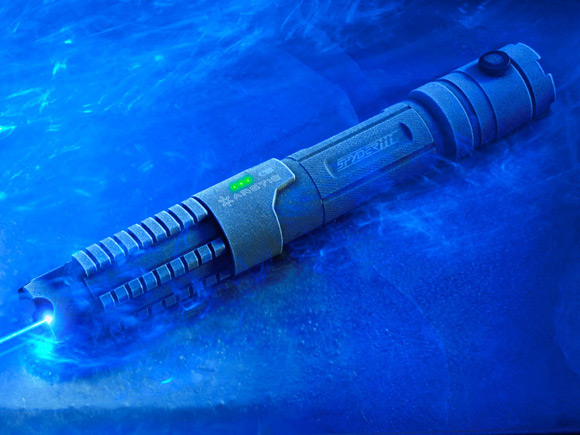 The maker explains that it whipped the direct blue laser diode components from a laser home theatre projector to create a weapon which "emits a cool blue beam that is up to 4000% brighter than a 405nm violet laser with an incredible output power of 1W".

The blurb warns: "Don't let the Arctic name fool you, this laser possesses the most burning capabilities of any portable laser in existence. That's why it's also the most dangerous laser ever created."

Quantifying the Arctic's 1W beam as "1,000 times stronger than laser pointers normally available to the public", Colton warned of potentially dire consequences if it was pointed at aircraft or car drivers. He said: "Under no circumstances should they be on sale on the internet."

The Trading Standards Institute's Christine Heemskerk said that while she was "seriously concerned about the sale of these products which should only be for industrial use", because the Arctic is manufactured in Hong Kong, there's nothing the TSI can do to block net sales of the weapon.

Which is good news for wannabe buyers of the Arctic, who've been enthusing on the interwebs about the laser's destructive potential. According to Sky, one drooled: "Real lasers that resemble Star Wars lightsabres, that can burn skin, cut through plastic and ignite matches - yes please."

Another said: "I must have this. Birthday present anyone? I will KILL things, with FIRE." ®