Is running a datacentre just like running a kitchen?

Analysis Cooling a datacentre the wrong way is like cooling a hot kitchen by opening the fridge door: it makes more sense to open a window and pump fresh air in.

That's the view of Bladeroom boss Paul Rogers, whose CV includes designing industrial kitchens. He and engineering partner Red Engineering Design ended up building what's claimed to be the UK's only modular air-cooled datacentre. It saves energy and delivers what Bladeroom calls the lowest power usage effectiveness (PUE) rating of any design in the world. If you want them to build you a datacenter you order how ever many modules you need, and they arrive on the back of truck.

A low PUE means that more of the power going into the facility is used for computing, instead of ancillary services designed to keep the machines running, especially cooling. It works because of the huge amount of attention to detail that the company has paid to ensuring that sensors track air temperatures and humidity levels. As a result, it's achieved a PUE of 1.13, where most facilities hover around 2.0, which means a datacentre uses twice as much energy than it needs to run its servers.

A key reason for the low PUE is Bladeroom's decision to only cool its datacentre modules to 24 degrees centigrade, while most run at around 18-20 degrees. According to Red Engineering director Nick Vaney, all servers are certified to run hotter than this, so there's still plenty of headroom. 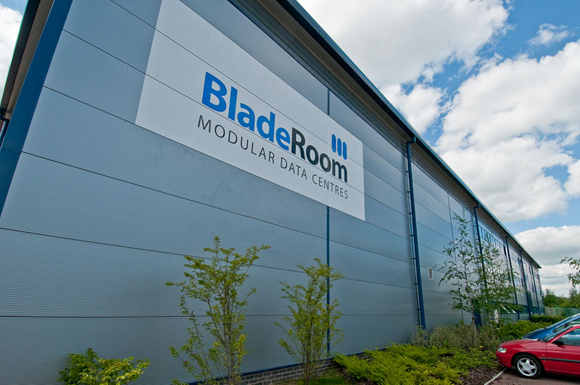 Vaney said that during testing he found that the native PUE of the design sits between 1.03 and 1.06. However, the datacentre includes a UPS and transformer that reduces efficiency by one percent. In addition, standby generators incorporate heaters to warm lubricants and water in winter, which between them push efficency down to its final figure of 1.13.

The air-cooling system consists of a series of modules that condition incoming air in a number of ways. First is a set of silencers - thick sound-deadening material followed by filters designed to remove particles larger than one micron, the F9 filtration standard.

The air is then pulled by fans into an cooler works using the adiabatic process - effectively, evaporative cooling. The cooler consists of panels containing corrugated sheets of material made of glass fibre combined with a china clay compound. This is soaked from the top using ordinary mains water that trickles down, cooling the air as it passes through gaps in the material.